D is for Dragon Hall!

This week's alphabet weekend was my call and, as we had Mr B's end of season football "do" on the Friday followed by a family day out to the coast and an engagement party on Saturday, I reluctantly called off plans for a Dancing lesson for two and reverted to Plan B! 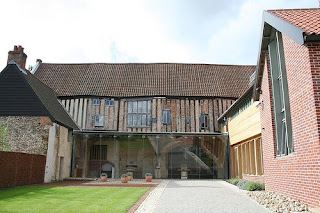 This morning was gorgeous so we walked along the river and into the city to visit Dragon Hall. This is the only medieval merchant's trading hall known to have survived in Europe which makes this building unique. Dragon Hall was built for one wealthy merchant, Robert Toppes, in 1430 on King's Street in Norwich and the museum covers the story of the building as well as putting the life of Toppes into historical perspective. 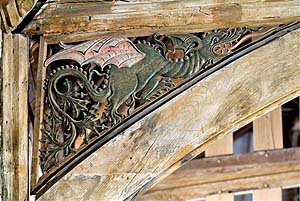 The hall is named after a carving of a dragon in the rafters of the Great Hall which reflects the importance of the Guild of St. George in the city. Walking around the building, it's hard to imagine that until the late 1970s this impressive medieval hall appeared to be three separate properties - one of which was a pub! Although the building is not that large, the audio-guide and displays were informative and relevant so we left feeling that we'd learned more about the city that we live in.

Much to Mr B's delight, (I know sarcasm is hard to read on the interwebs, so should point out that there was a dab used just now) on our walk back home, I noticed that The Bishop's Garden was open in aid of the charity Livability. This is a lovely four acre walled garden in the centre of the city and, as might be expected, is right next to Norwich Cathedral. I'd not visited it before and it really is a delight - it has a big vegetable garden, a wild flower labyrinth, a lovely herbaceous border the border (see above) and a large expanse of lawn. If only I could afford a house with such a lovely big garden in the city centre! Drool...
Posted by Peta at 16:03

That looks lovely! You can probably get dancing in somehwre else (specific types of dancing) depending on your letters.

Not a bad idea and I do have F coming up in a couple of weeks. Fandango! Foxtrot! Flamenco!