Son of the Shadows & Child of the Prophecy - Juliet Marillier

I read, and really enjoyed, Daughter of the Forest back in January as part of the Sc-Fi experience reading challenge and when I saw that the library had the last two books in the series, just sitting there on the shelf, I could not resist them! All three of these books work as stand alone reads but I think, to get full enjoyment, they would be better if read in order. 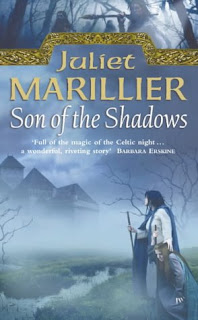 Son of the Shadows takes up the story of the children of Sorcha, who in the last book had to try to save her brothers after a sorceress had turned them into swans, and Hugh, the Briton she married. Her daughter Liadan is a gifted seer and healer who thinks, in spite of her visions, that she knows what the future has in store for her - caring for her dying mother and then an alliance marriage to a strategically important near neighbour, Eamonn. A chance meeting on the road carries her off to care for a dying man - one of the mercenaries of the sinister Painted Man, Eamonn's arch-enemy and a killer for hire. Liadan discovers that she cannot choose where she loves and that she and the Painted Man are as bound up in destiny as her mother and father were before her.

The developing romance between Liadan and the Painted Man is a delight and I really enjoyed seeing their relationship grow. This book felt like more of a traditional historical romance with talk of strategic marriages, chieftain alliances and well trained warriors. There is still plenty of magic and the family's heritage is a central theme as the ramifications of the ancient prophecy continue to be felt by them all. Having said that, I really liked this book - Liadan and the Painted Man made a great couple (him = strong silent type so Peta = happy) and the story was exciting throughout. 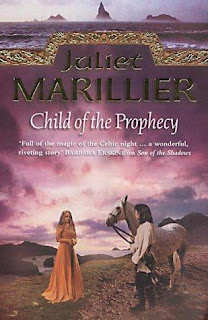 In Child of the Prophecy we follow the next generation of the family and this is the story of Fainne, the daughter of Liadan's sister, Niamh. Fianne has been raised in isolation and trained in magic by her loving but remote druid-father, Ciaran, and her ruthless sorceress-grandmother, the Lady Oonagh. Who was the evil sorceress from the Daughter of the Shadows. They send Fianne to Sevenwaters to live among relatives, who had no knowledge of her existence, to carry out her grandmother's long-planned vengeance on the clan - and on the Old Ones, who are the source of Ireland's mystic power. Fianne is reluctant to harm her new-found family but if she lets them live, the Lady Oonagh will kill both her father and Darragh, the handsome young horse tamer who is the only friend she has ever known.

In this final volume several of the threads from the first two books are pulled together and the true meaning of the prophecy is finally resolved. Whilst, of course, there is a touch of romance, this book is much more about struggling with torn loyalty and the pain of making difficult decisions that impact several of the characters we've already met in the previous books.

I thought that with the ending of Child of the Prophecy I'd now finished this series but I see that There Is Another... It's currently on loan at the library so fingers crossed that the nice person who has it returns it soon!

Here's a link to Juliet Marillier's website which includes and some photos that she took that were the inspiration of the Sevenwaters area. I was really sorry to read on a recent update that she has embarked upon a lengthy course of chemotherapy/radiology and my thoughts go out to her.
Posted by Peta at 18:37

Labels: Child of the Prophecy, Juliet Marillier, Sevenwater, Son of the Shadows

I loved this series, the second was my absolute favourite though! I haven't read the 4th book yet but have it on my shelf. Great reviews!

My favourite was definately book 2 as well. I've just finished the 4th book (and I am a little tired today as a result of staying up to do so!) and I'll post a review soon. It's more in line with Book 2 than the third was so I hope you enjoy it!