This is my first read for the non-fiction five challenge.

Along with other prizes, this book was last year's winner of the Samuel Johnson prize for non-fiction but what first attracted to me to this book was the cover which I think is fabulous. The wonderfully titled The Suspicions of Mr. Whicher: or the Murder at Road Hill House

has been on my shelf for a few months and joining the non-fiction reading challenge was the perfect reason to pick it up and actually get around to reading it! 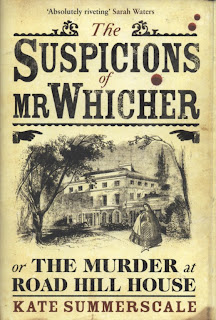 : "It is a summer's night in 1860. In an elegant detached Georgian house in the village of Road, Wiltshire, all is quiet. Behind shuttered windows the Kent family lies sound asleep. At some point after midnight a dog barks. The family wakes the next morning to a horrific discovery: an unimaginably gruesome murder has taken place in their home.

Jack Whicher of Scotland Yard, the most celebrated detective of his day, reaches Road Hill House a fortnight later. He faces an unenviable task: to solve a case in which the grieving family are the suspects. A true story that inspired a generation of writers such as Wilkie Collins, Charles Dickens and Arthur Conan Doyle, this has all the hallmarks of the classic murder mystery - a body; a detective; a country house steeped in secrets."

Covered in this book is not just the investigation of the murder at Road Hill House (which is horribly fascinating in its own right) but also of the emergence of the professional detective and the social values of Victorian society at that point in history. The sensationalism of this case in the press across England was fascinating and it's very easy to understand why this particular chilling murder caused such public interest.

I found Kate Summerscale's writing style to be very accessible - she writes with clarity and it was clear throughout that this book was meticulously researched. I should be very clear here - this is a work of non-fiction and not a novelisation of the crime! This is the true story of a real Victorian family dealing with an extremely unpleasant murder carried out by someone living within their home and then being placed under a spotlight whilst the whole country speculated about their domestic arrangements.

Looking at the scores given by readers of the book on Amazon, there's a really interesting polarisation of views - clearly people either love or hate this book! I definitely fall into the first camp as I think that this book provides a fascinating glimpse into the era and the crime itself, whilst horrifying, is only part of the story.
Posted by Peta at 07:58

Really enjoyed this book too. I liked her approach to the fiction/faction problem. There really isn't any reason why a non-fiction shouldn't be as readable and innovative as fiction.