is the Stephen Deas’s debut novel and also the first book in a trilogy - the next book is due for publication in 2010. This means that I accidentally broke my own rule to not read books in a series until all the books are published as I hate cliffhangers when I can't immediately open the next book! 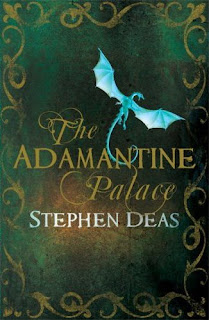 From the blurb: "The Adamantine Palace lies at the centre of an empire that grew out of ashes. Once dragons ruled the world and man was little more than prey. The Empire has grown fat. And now one man wants it for himself. A man prepared to poison the king just as he has poisoned his own father. A man prepared to murder his lover and bed her daughter. But unknown to him there are flames on the way. A single dragon has gone missing. And even one dragon on the loose could spell disaster for the Empire."

I blatantly bought this book just because it has dragons in it. Oh and I liked the cover. The plot itself revolves around the scheming members of several royal families who are jostling for the position of Speaker - which puts the holder in a powerful position over the other kings and queens for the next ten years. The point of view changes with each chapter and this did mean that I struggled slightly to keep track of what on earth is going on and with who. There are several family trees provided at the front of the book which helped in later stages as the politics became more complex.

The dragons in this book are domesticated however it becomes clear that this is only because their racial memories are being suppressed by the use of strong chemicals rather than because of a bond with the humans characters. I found this an interesting premise and a nice slant on the usual dragon-human bond. Refreshingly, no character is safe in this fast-paced read and that made for some unexpected plot twists. Whilst I enjoyed the speed that the book romped on at, this does mean that some of the world-building was light and the family trees I mentioned earlier might not have been necessary if more time had been spent on "growing" the characters and how they fitted together. But then the pace would not have been as snappy so what do I know?

In summary though this is an entertaining and enjoyable book that definitely left me wanting to know what happens next to the dragons...
Posted by Peta at 07:14

I'm so coveting this one. I think it would be nice to compare this series with Naomi Novick's Temeraire series, as the dragon/human relationships are so different.

I've not read any of the Temeraire series yet but I do intend to do so as they sound right up my street!