Eva Ibbotson is the author of several children's books including Journey to the River Sea which won the Nestle Smarties Book Prize. She also writes novels for "older readers". 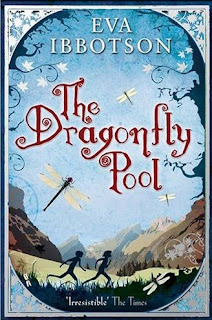 From the blurb: "Tally Hamilton is furious to hear she is being sent from London to a horrid, stuffy boarding school in the countryside. And all because of the stupid war. But Delderton Hall is a far more interesting place than Tally ever imagined, and an exciting school trip to the beautiful and luscious kingdom of Bergania whisks Tally into an unexpected adventure ...will she be able to save her new friend, Prince Tamil, before it's too late?"

is, as you may have gathered, one of her children's books and is set in a British boarding school during WW2. The author, Eva Ibbotson, was herself born in Vienna, but when the Nazis came to power her family fled to England and she was sent to boarding school. A preface to this book explains that this was a very progressive school too where characters very like the eccentric ones in this story actually existed.

What really appealed to me about this story was such a strong female lead in the form of Tally. Tally is very level-headed, practical, empathetic and filled with common sense. She's also got a big heart and is much loved by her two aunts and widowed father - all of whom are devastated that they need to send her away from London. On arriving at the school she rapidly assesses the other students and is very shortly central to life there. It is her idea that a party of children from the school go to a folk dancing festival in the fictional country of Bergania after seeing a news reel at the cinema about the King's refusal to allow German troops in. That none of the children actually know how to folk dance doesn't halt Tally's plan and they create the Delderton Flurry Dance from ideas gleaned from books. Now that is one folk dance I would like to see - it sounded hilarious!

It's in Bergania that she meets the young Prince Tamil and the adventure really starts as the children have to work together to evade Nazis, evil family members and save the young prince from genuine danger. The Dragonfly Pool manages to successfully mix up a stirring war story, old fashioned boarding school story into a convincing "ripping yarn" period piece. I would have happily believed that this book was written in the late 40's or 50's instead of 2008.

This is a really charming story and absolutely perfect for younger readers. I'd also love to see it made into a make a great film too as the range of