Last week I saw a review of this book by Anne Brooke over on Vulpes Libris and could not resist buying it immediately - which meant I had an excuse to buy other books and therefore bought far too many but that's another story... 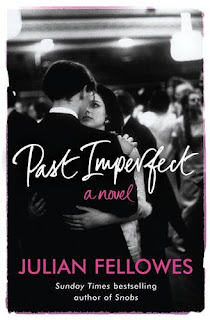 Damian Baxter is very, very rich. But he has one concern, which is becoming more urgent as the weeks go by: who should inherit his fortune. A letter from an ex-girlfriend suggests that, as a young man, Damian may have fathered a child, but the letter is anonymous. Finding the truth will not be easy – and the only man who knows where to look is Damian’s sworn enemy.

. I think that it's an absolutely stunning choice - just look at the intensity - for a book that describes the collapse of the old British aristocratic way of life. The book is narrated by an man who was part of the London scene 1960s and chronicles the end of The Season as a crop of débutantes (often heavily guided by their parents) scramble for suitable husbands as the social upheaval of the Sixties takes its toll and their way of life changes forever.

Whilst the light Fellowes shines on most of the characters is an unflattering one it was almost impossible not to feel compassion as the social order utterly changed almost overnight and left a generation floundering and struggling to adapt. For an excellent and thorough review do go and read Anne's one and I absolutely agree with her observations about what lets down an otherwise excellent book.

Clearly this is a book that divides opinions though and I trot out Exhibit A from Kate Kellaway writing for the Observer in October last year "Reading Past Imperfect is like being stuck at a party with a bore and being forced to do that unpardonably rude thing - look over his shoulder in the hope of spotting someone, anyone - more interesting on the horizon." Ouch.

The author, Julian Fellowes, is the same Julian Fellowes who wrote Gosforth Park (I suspect that the clue was in the name but I really didn't connect it) and by complete coincidence on the day I started reading this book I listened to a recent Simon Mayo/Mark Kermode film podcast where he was a guest and they mentioned this book. Apparently it's been optioned and, if made well, this could be a really interesting film and I would love to see who they cast!
Posted by Peta at 10:58 4 comments:

I am really not sure what is going on with my reading/blogging this month. In September I read just five books and wrote only ONE post. This must be a record low for me and I honestly feel guilty that Book Aid International will only get £5 from me this time around. I have however just had a slightly naughty splurge at Amazon so I now have a toppling stack of books waiting to be read and hopefully that will mean that I have a slightly faster turnaround in November. I say "slightly naughty" as I have enough books to read on my shelves for the next year and a half and really didn't "need" any more...

Challenges Update:
Twelve Step Poetry - This month I re-visited a favourite poet from my teens, Wendy Cope, but I've not written about that experience yet. Ignoring the huge selection available on my shelf for reading, and telling myself I needed extra poetry books in preparation for future months, I've bought Christina Rossetti's The Goblin Market and Carole Anne Duffy's The World's Wife and I'm really looking forward to reading those.

Graphic Novel Challenge - a pathetic zero books read this month to contribute to this challenge but part of the above mentioned Amazon order was Fables and League of Extraordinary Gentlemen which both count. Although it doesn't count as a book read, I should mention that Mr B and I watched Waltz with Bashir this month. It's a film based on the autobiographical graphic novel of the same title by Ari Folman and it was absolutely wonderful.

R.I.P. IV - The wonderful The Thirteenth Tale was the only book that I read this month that "counted" towards this challenge. Again, I've not managed to write a review of it but it was such a good book that I really should and hopefully I'll get time to do so this weekend.