This is China Miéville's first book for children and he both wrote and illustrated it. I should also mention that it won the 2008 Locus Award for Young Adult Book. I've read, and enjoyed, all of his books written for adults and could not resist giving in to temptation when I saw this on offer. Perhaps that's why my TBR pile is so large... 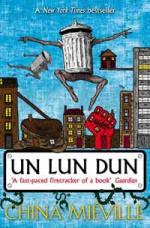 The blurb from amazon: "UnLondon is at war. We're under attack. And it's been written, for centuries, that you you will come and save us.' Stumbling through a secret entrance, Zanna and Deeba emerge in the strange wonderland of UnLondon. Here all the lost and broken things of London end up, and some of its people, too including Brokkenbroll, boss of the broken umbrellas and Hemi the half-ghost boy.

UnLondon is a place where Routemaster buses have legs, where Librarians are 'bookaneers', intrepid adventurers dedicated to hunting down lost books, and postmen spend years tracking the mobile addresses of the ever changing Puzzleborough. But the girls have arrived at a dangerous time UnLondon is under siege by the sinister Smog; it's a city awaiting its hero."

is set in a parallel London, his surreal version called UnLondon contains components that would be familiar to Londoners but with a twist. For starters, the double-decker buses float in the sky or walk around on feet... Looking at the cover, you can also get an idea for the slightly different housing standards in the alternative version of the city! I really thought that the illustrations were great - some of them in particular have a very disturbing quality that should appeal to gruesome youngsters and I really enjoyed the part they played in building up an image of UnLondon.

Miéville excels at taking the ordinary and subverting it into something new. Characters introduced included the awesome "Binja"'s (as featured leaping on the cover) which are guard dustbins with arms and legs and kick-ass martial arts skills. Other notable mentions for me include the roaming packs of feral flesh-eating giraffes who feed on the unwary and the Black Windows who live in Webminster Abbey.

Amongst others, Deeba's sidekicks include a bus conductor, a book of prophecy that is trying to come to terms with the discover that it's inaccurate, and a small, empty milk carton called Curdle. Together they adventure around the districts that make up UnLondon and battle against the mysterious cloud of smoke, the Smog, which it turns out has been banished from London by the Klinneract (the Clean Air Act).

He has a fantastic imagination and is not afraid to kill off characters which means that this story was enormous fun to read even as an adult. You could see where it was going but you were never quite sure how it would get there. Perhaps my only criticism would be that there were so many inventive characters and concepts that they sometimes distracted me from the main story. It's an odd thing to say but I found at times that there were too many really interesting ideas in the book and I wanted to explore tangents rather than follow the fight for freedom.

Thankfully, the book is left with plenty scope for a sequel and I'd love to see what he could do with some of the other cities alluded to like No York, Lost Angeles, Hong Gone, Sans Francisco, Helsunki or Romeless. Or just to go back to UnLondon and explore more of it!

For the interested, Del Ray have made a great Un Lun Dun sub-site for the book with an excerpt, teachers notes, more illustrations and an interesting China Miéville interview.
Posted by Peta at 10:28

Great review, I have thought about reading this one before, after that review I think I will definately have to find time to fit it in. Mieville is an author I have been interested in for a while I just haven't managed to get round to it. I have read some very positive things about his most recent book also.

I read The City and The City earlier this year and enjoyed it but I gather he can be an acquired taste and it seems that you love him or hate him. I'm in the first camp and would suggest Perdido Street Station or The Scar for starters!

I think what I like best about these spam comments is that they all seem to be from different people and saying different things. An observation that is based on appearances as I don't even know what language they are in! I wonder how many I will get and if I am receiving them on the basis I have mentioned "China" in the title and post...