is a book about books and a book about the love of books – which made it sound like a Bookling sort of book to me! It is really intended for the young teen market however it caught my eye on my niece’s bookshelf so I liberated it. Although the first in a trilogy, Inkheart ties up enough lose ends to be enjoyed as a stand alone read.

The novel tells the story of Meggie (a twelve year old girl who really loves books) her father Mo, a book-binder, and a stranger named Dustfinger who shows up at their doorstep on a wet and windy night. Although it’s not revealed at the outset, Mo has the ability to bring characters from books into the real word by reading aloud. His talent comes at a price however as something from this world is always sent into the book in their place.

It is Mo’s fault that some of the evil characters from the titular book-in-a-book Inkheart are at large in this world and Meggie, Mo and Dustfinger (joined by Meggie’s book-obsessed great-aunt Elinor) set off to recover the last copy of Inkheart. Although I’d describe this as a magical tale, it is definitely not a Harry Potter clone – it’s set in modern Italy and inventively imagines what would happen if fully-formed fictional characters came to life.

One of my regrets about reading Inkspell was that I did not get to do so when I was the same age as Meggie as the younger me would have absolutely adored it and may possibly have given it a top ten place in her book box. The adult me noticed that the phrasing is occasionally slightly awkward but it’s hard to tell if this is as a result of the translation from the original German or not. The story itself is entertaining enough to smooth out any quibbles though and I did I stay up well past my bedtime on Sunday to finish it.

I enjoyed this book and would heartily recommend it to any young (or old) reader - although the villains are a bit scary so maybe not too young... I look forward to borrowing the second book in the trilogy, Inkspell, and the slightly ominously titled Inkdeath in when it’s published in April. It’s due to be released as a film starring Brendan Fraser later this year so get in before the hype does!
Posted by Peta at 14:05 1 comment:

is an anthology of “the world’s greatest diarists” edited by Irene and Alan Taylor. The ever-lovely Mr B bought me this book after I spotted a mention of it on dovegreyreader’s blog a few days ago when she was talking about her daily reads for 2008. I’ve spent a very happy couple of hours this afternoon browsing through January and I am now fully caught up. I must confess that I also read the first one for tomorrow (my eye was caught by Pepys describing his uncle’s new wife as “a pitiful, old, ugly, ill-bred woman in a hatt”) but then I stopped myself as I intend to savour this book rather than gulp it down.

The book is laid out like a diary with 1800ish entries from 170 diarists spread throughout the year. Some contributors are very famous diary-keepers such as Benn, Pepys and Waugh but others are more obscure (although that could just be me!) and the dipping in and out of such a wide variety of lives being lived across several centuries is where the real joy of this book comes from. There is a useful, albeit brief, biography section at the end of the book which I have already used several times. Occasionally it is frustrating to read an entry when you don’t understand the context but luckily there is a solution…

I Wrote On The Pages!! I’ve seen the “do you or don’t you?” topic debated before and I felt that this was a good choice of book to test my nerve on. I am happy to report that it’s been a very liberating experience and I have enjoyed scrawling in the margins such illuminating notes to my future self as “more context” and “Who is she? Find out.” So far the writing is in pencil as I just could not bring myself to write in pen but we’ll see how that rule fares when I don’t have one to hand.

I look forward to my daily dose of this book throughout the year and I already have plans to dig out my copy of Waugh’s collected diaries (that I had forgotten I owned) and to buy several others…. Does the booklist ever stop growing?

Oh – and in case you are wondering where the title comes from (as Mr B and I were): “A diary is an assassin’s cloak which we wear when we stab a comrade in the back with a pen” – Willian Soutar, 1934.

Today I had a most lovely surprise. I received a copy of John Ringo's There Will Be Dragons for Christmas and realised that it was part of a series. I popped them onto my green metropolis wish list, had a little pootle around some bookish sites in search of copies and then forgot I needed them.

Finding the book next to my upstairs PC prompted my memory and I asked google for some help in locating the books. Locate them I did and even better they were free! The good people at Baen Books have an online library of books you can download - and they tell you why here. I think it's a great way to sample authors I have heard of (but not quite got around to reading yet) and I look forward to downloading more.

I also thought I'd share the first book's cover art

as it's pretty special. Although what you can't see from amazon's picture is that the mountainous background is a lovely shimmery silver. :D
Posted by Peta at 14:19 No comments:

Oribit have posted online the prologue from Iain M. Banks' new book Matter which is published in February. This is the first Culture novel since Look to Windward in 2000 and I Just Can't Wait! I'd been hoping to win an advance copy in a competition that The Book Swede alerted me to however suspect I'll need to place my pre-order with amazon instead and hope that they accidentally deliver it early... Link: Iain M. Banks - Matter

One of my most treasured possessions is my signed copy of The Algebraist that I queued faithfully to buy at full price after hearing Iain M. do a lovely reading and then speak at my local Ottakars (maytheyrestinpeace) on the 6th October 2004 at 7pm. Yes... I still have the ticket on my notice board! :D 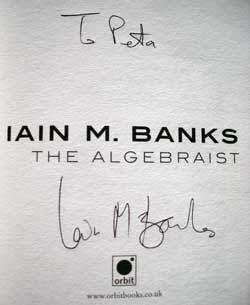 I'd like to extend a very warm welcome to anyone who has popped in to visit me at The Bookling.

I feel a little bit as though I have opened up a brand new notebook and am writing on the very first page. I'm worried that I might smudge it so please imagine that I am using my favourite fountain pen, royal blue ink and my very best joined-up handwriting to write this post. Best foot forward and all.

I've been putting off scrawling this page for some time now. "I'll start in the new year", I thought to myself... Then it was "I'll do it when I'm feeling better" *cough* *sniff* *cough*. Today it was "I can't write a post until I have sorted out the header image". That's taken up the best part of this afternoon and I have had to finally force myself to stop tinkering with it. The image I used was scanned in from the magically illustrated City of Dreaming Books by Walter Moers and then vectorised and coloured in by me. Probably very illegal but fingers crossed that I will avoid prosecution. If anyone objects I will take it down, of course! It occurs to me that I'd better do a post about the book itself at some stage...

Link to City of Dreaming Books