We took a hiatus from alphabet weekending as we were going through a very busy patch at work, and knew we were going to Canada, so agreed that taking 6 weeks off was better than arranging half-hearted alphabet activities.

Tegan & Sara were playing this weekend at the Shepherd's Bush Empire and, in a stoke of genius, I nabbed this as my "T" activity for the re-launch of our weekend alphabeting shedule. They are actually Canadian and we'd checked out their tour list in the hope that they were playing in Toronto/Montreal whilst we were out there only to find that the week after we got back they were in London. It was a really good gig (although I thought that the crowd was a bit on the quiet side) and I absolutely loved hearing them sing "Where Does The Good Go" live as well as listening to some of their new material. 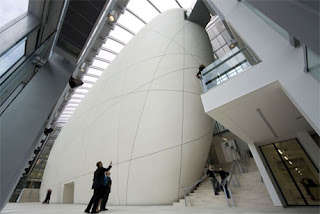 I'm reading the fascinating Dry Store Room No. 1: The Secret Life of the Natural History Museum

by Richard Fortey at the moment and, as we were in London, it seemed like a good opportunity to fit in a visit to the newly opened Darwin Cocoon at the Natural History Museum. this area of the museum was built to house the museum's enormous collection of plant and animal specimens.

After an initial wobble when I realised that to enter the cocoon itself I'd have to cross a glass lined walkway on the 7th floor (I don't handle heights well!) I enjoyed the experience. Although visitor numbers are limited by the booking of timed slots, it was quite busy and as a high percentage of the displays are interactive it was sometimes hard to get a "go". You're issued with your own NaturePlus Card which you can scan at interesting points as you go around and then visit content online when you get home. The picture below (not by me) is of a section of a gorgeous display that gives a flavour of the variety of the plant and insect collections the museum holds and, as I read Dry Store Room No 1, my respect for the knowledge, dedication and passion that the scientists working here must have increases. 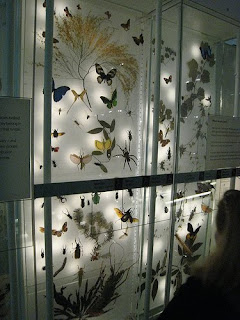 The Wildlife Photographer of the Year exhibition is also on at the NHM at the moment and, despite the museum being insanely busy, we managed to get tickets. It was a shame that there were so many people allowed into the room at once as it was hard to absorb the images properly whilst shuffling past people and whispering "excuse me" repeatedly but I would imagine that this is a huge earning opportunity for the otherwise free museum and they need to maximise their income from it. There are some stunning images in that exhibition and I would love to be talented (or patient) enough to take photos of that quality myself. I muttered something about my "need" for a good camera with zoom to Mr B and hope that he's bracing himself for the inevitable purchase next year when I have recovered from the cost of Canada/Christmas!
Posted by Peta at 11:18 2 comments:

Guy Gavriel Kay's Fionavar Tapestry trilogy comprises of The Summer Tree, The Wandering Fire and The Darkest Road. These books are set partly in contemporary Toronto (which is where our five lead characters are plucked from) but events are set mostly in the fantasy world of Fionavar. Fionavar is the first of all the worlds and Kay uses this concept to thread myths and sagas from our own world into the story as reflections of events in this, and other, versions.

This trilogy is an "epic fantasy" in the Tolkein tradition. This is probably an analogy used too frequently for this author as I learn today that Kay helped Christopher Tolkein edit The Silmarillion but it is one that feels apt especially as it has elves, dwarves, noble kings, powerful magicians and "ordinary" people thrust into the middle of a grand conflict between Good and Evil.

The edition I read was an omnibus and I rather liked reading the trilogy in this way as it didn't feel as if I was reading a trilogy of books but one large novel with sections. At one point, I admit, I was beginning to wonder just how many themes and characters one trilogy could sustain but Kay brought the story back together towards the end and re-connected (nearly all of) the strands in an ultimately satisfying way and without losing the impact of some of the sub-plots.

It's also worth mentioning that Kay does not shy away from killing, or hurting, major characters and this meant that I didn't feel as if anyone was "safe" which can be a plot issue when reading fantasy fiction. This is a, sometimes tear jerking, story of free will, forgiveness and ultimately the nobility of sacrifice for the common good and I would recommend it to fantasy fans looking for an epic read.
Posted by Peta at 08:05 No comments:

Whilst in Toronto I "accidentally" discovered that the World's Biggest Bookstore* was very close to our friend's apartment so I gave my husband the choice of spending some time there or visiting the Dead Sea Scrolls exhibition at the Royal Ontario Museum... 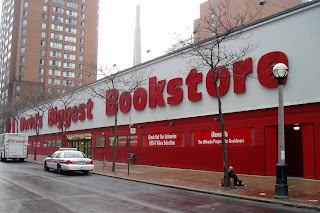 He chose a trip to the bookshop (on condition he could buy books too!) and when I realised just how many books this place stocked, I genuinely felt a bit overwhelmed... and a bit over-excited too. Aside from a library, I honestly don't believe that I have ever seen this many books in one room! It was such a delight as well to see so many Sci-Fi/Fantasy genre books on display and I spent aaages browsing through them - oh the novelty of visiting a book shop that actually stocks an entire series! They also have a great graphic novel and manga section and it was fabulous to be able to look at books that I've only read about online and get a real feel for the artwork.

I only allowed myself to buy three books there and they HAD to already be on my wish list although I concede that given the length of my wish list that's not exactly difficult to do. I bought an anthology of Guy Gavriel Kay's Fionavar Tapestry, Cory Doctorow's Someone Comes to Town, Someone Leaves Town and Mark Danielewski's House of Leaves. The first two have a Toronto connection so it seemed appropriate to buy them there and the third I have had my eye on for a while and just looked too interesting to pass up. A seriously crazy looking book that would have been perfect for R.I.P. IV! I am a bit cross with myself that I ended up not buying any of Alice Munro's work whilst there, given she's a prominent Canadian author whose work I have not read, but I honestly felt a bit overwhelmed by the sheer choice.

If I could have worked out how to get them home, I could so easily have bought many, many, many more books as just by browsing I found so many tempting reads that I'd not previously heard of. There really is something about being in a book shop and having such a huge choice about what to buy there and then that is so alluring. Just as well that shop is in another continent really or my bank balance would be (more of) a disgrace. I wish that there was somewhere near me where I could go and look at books I have read about online but I doubt Norwich is really large enough to support this scale of shop. :(

* actually no longer the case but it was certainly a big one and given that's the name of the shop, I am not sure how else to refer to it!
Posted by Peta at 14:54 No comments:

I feel as if I should hang a large "I Aten't Dead" note around my blog's virtual neck and my humble apologies for my utter lack of posting. I've been visiting friends who live in Toronto for the last couple of weeks and I write this post from Montréal, Quebec as Mr B and I come towards the end of our trip to Canada. We've been really lucky that the leaves are still on the trees so the countryside is a delight to drive through as the remnants of the Fall colours are incredible.

As well as doing some Toronto downtown exploring and obvious tourist things like dinner in the CN Tower, we were lucky enough to get tickets to see the Toronto Raptors win their first game of the season (Go Raptors!), visited Gananoque, Sandbanks National Park, Niagara Falls/Niagara-on-the-Lake and we've just spent a couple of nights in Québec City. Phew.

In contrast to the last couple of months, I've read a grand total of 13 books this month - although weirdly only one whilst I have actually been on holiday - s0 that's another £13 to my Book Aid fund which is now over the £100 mark! I've had a great time reading recently and nearly every book I read in October was the result of an amazon splurge where I bought books I knew I'd enjoy and race through. Rather shamefully I only blogged about the first book that I read this month and I really don't think I am going to get around to catching those posts up...