This is a Sci-Fi experience book.

Embracing the spirit of the experience, I chose Stephen Baxter because I’ve not read any of his work before. I saw Flood

when I was browsing the SFF shelves for inspiration of my library and thought it rang a bell – turned out it was because it was included in Book Smuggler Thea’s top reads of 2009. You can read their review of Flood over at their blog. After finishing it, I realised that it's part one in a duology (d'oh!) and the second book, Ark, has been recently released and is now reserved for me at the library! 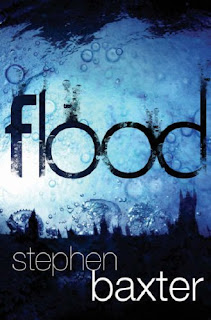 The Blurb: “Four hostages are rescued from a group of religious extremists in Barcelona. After five years of being held captive together, they make a vow to always watch out for one another. But they never expected this…

The world they have returned to has been transformed by water—and the water is rising. As it continues to flow from the earth’s mantle, entire countries disappear. High ground becomes a precious commodity. And finally, the dreadful truth is revealed: before fifty years have passed, there will be nowhere left to run.”

Living in Norfolk, under the new policy of non-maintenance of coastal defences, and with the Broads providing a watery gateway into the heart of the county makes me already rather conscious of the potential impact of a relatively small rise in sea level.

The story of the flooding starts out in the UK so as the sea rises places I know start to go underwater and that makes the scenario Baxter describes really rather real. The book is divided into sections tracking significant rises in sea levels with accompanying (unnerving) maps as the catastrophe progresses.

Although following the experiences of a handful of individuals linked to the original hostages, this book is very much about the impact on humanity as a whole. There are massive human migrations that follow flooding events and the governments soon are stretched to breaking points as money is spent on sea defences that are overwhelmed before the projects can even be completed. With land reducing, agriculture is hugely impacted and it's not long before salvage platforms are built over submerged cities to extract tinned goods and other materials to try to enable those still alive to survive. There's plenty of food for thought in this book about the tough choices that would need to be made as land mass, and infrastructure, vanishes and people need to take to the extreme highlands, or rafts, to survive.

The impact of the rise in water levels is so huge that I found it hard to get to grips with most of the characters let alone to understand them as fully realised individuals. For most of them, there was little to empathise with and several of them seemed to be in the book just so that they could witness another flooding milestone. Or to die! I started the book being absolutely thrilled by it but if I am honest by the last few chapters I just wanted to know who "made it" through. I would say though, in fairness, that the story itself is so massive that it would be hard to keep the excitement of the first two thirds goin. Also, it can't have been that bad because I will absolutely be reading Ark because I am genuinely interested in following this story's journey.
Posted by Peta at 07:40 2 comments: 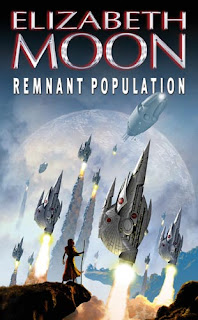 I realised when choosing my next book to read that my Sci-Fi experience so far has been dominated by books from male authors. Last year, in an effort to redress this balance, I read a book by Ursula le Gruin so this time I thought I’d better try out a different female Sci-Fi author Elizabeth Moon and the book of hers that I chose to read is one of her (rare) stand alone novels, Remnant Population

The book’s central character, Ofelia, lives with her son and daughter-in-law on a colony planet that she came to with her husband when it was first settled. Along with the rest of the community the family is due to be re-homed onto a new world when the franchise is lost. Deciding that she does not wish to be forcibly evicted and start again on a new planet, Ofelia hides in the woods and evades the evacuation.

For the first time in her life, she finds herself free to do exactly as she pleases without having to consider the restrictions on her behaviour imposed by society. As the only person left on the planet, she has the freedom of the still functional abandoned settlement and for the first part of the book we follow Ofelia’s first steps to independence.

Her carefree way of life changes when, by chance, she is listening to the radio as new settler ships arrive on the other side of the planet. She hears them being slaughtered by a previously unknown, and presumably sentient, native population and this changes her attitude towards her solitary lifestyle.

After a slow build up, the book now turns into a "first contact" story and Ofelia becomes the link between the indigenous peoples and the skeptical scientists who soon arrive to investigate the loss of the colony.

I enjoyed Moon’s writing style and enjoyed watching Ofelia grow as a character and seeing her grow in confidence and capability. Although not explicitly stated, she has clearly had a hard, restrictive life and, judging by the attitude towards her from the human scientists, age is no longer respected. Again, Moon doesn’t explicitly describe how human society has developed and it was interesting piecing together snippets of information that implied what the human political and social development.

Overall, as a sci-fi experience this was another opportunity to try out a new-to-me-author and again it was a success! On the basis of this I’ll happily seek out Moon’s work again - starting with Sheepfarmer's Daughter from the Legend of Paksenarrion series which is available for free download from Baen Books!
Posted by Peta at 08:04 2 comments: