Here are the links to my previous posts about the Sevenwaters series - Daughter of the Forest and Son of the Shadows/Child of the Prophecy. 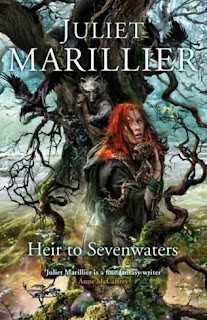 I was very pleased to realise, when I returned the last two books of the series, that I was able to borrow this one! The joy about reading books from the library is that it's totally guilt free as the extra reads don't join the toppling TBR pile. Actually, now I think about it, not totally guilt free as by reading books from the library, I'm not exactly making inroads into the pile. Hrmmm. More ethical thinking required!

focuses on Clodagh, daughter to Lady Aisling and Lord Sean who is the twin brother of Liadan, heroine of Son of the Shadows. Keeping up? Good...

It's now three years after the events of Child of the Prophey, and at the start of the book, having given birth to six daughters, Aisling is pregnant however this is cause for concern rather than celebration as she is well past the safe age for childbearing. During her difficult pregnancy, management of the large household falls to the very ordinary and practical Clodagh as her father is distracted by concern for his wife as well as tension between rival neighbouring clans. A heightened sense of responsibility for others means that after her baby brother is born, Clodagh adds looking after him to her list of tasks until one night he is stolen and a changeling that only she can see is left in his place...

This book is more fairytale-ish than the others as Clodagh enters the Otherworld in search of her brother and to confront the powerful fairy Lord Mac Dara who lives there. Reluctantly helping her in her quest is Cathal, who is a fearsome warriors trained by her cousin, who has a very prickly nature and a lack of self-belief. Unlike previous Sevenwater heroines, Clodagh doesn't have any special abilities that help her fulfil her task so it's only her courage, quick thinking, ability to make friends and determination that can help her to succeed.

This book has more emphasis on romance than the darker Child of the Prophecy did - which was a definite plus for me. The developing trust and affection between Clodagh and Cathal is quite sweet if slightly lacking in emotional intensity. Like the other books in this series, the importance of duty and family is a central theme but there's plenty of adventure and magic too. One thing I would comment on is that it felt a bit less mature than the other books in the trilogy - which is not necessarily a bad thing - but the tone of the book struck me as more like that of her delightful young adult book Wildwood Dancing so perhaps writing for a younger audience has influenced Marillier's style in the years between writing those books and this one. I enjoyed the latest installment in the Sevenwaters saga all the same and want more!
Posted by Peta at 07:58

Thanks for the great review! I read the first three in the series last year and got Heir to Sevenwaters for Christmas but I read so many bad reviews that I haven't read it yet. Now I've read your review I'm excited about reading it again.

On reflection, I did enjoy it much more than Child of the Prophecy so if you enjoyed the previous three, this one will be like visiting an old friend! I do feel a burden of responsibility for your enjoyment now though! :)

Wonderful review, and I completely agree with you. Heir to Sevenwaters was easily one of my favorite reads from last year :) I cannot wait for the next Sevenwaters book!

Thea, it's pretty much all your blog's fault that I am now "addicted" to Juliet Marrillier. A great "discover" and I have a sneaking suspicion I will have read everything she's written by the end of this year!

Great review! My daughter got me reading The Sevenwaters Trilogy, and I absolutely loved them...they left me wanting more. I haven't read Heir to Sevenwaters yet, but I've read great reviews on it and look forward to reading it along with the others Juliet Marillier has written. Thanks for sharing your review. : )

What a timely comment as I was thinking it's about time to try some of her other work. I so nearly borrowed Foxmask & Wolfskin from the library yesterday but in the end decided not to as they were both enormous hardbacks and it's a 25 min walk home! Wish I had now though...