A Guide to the Birds of East Africa - Nicholas Drayson

This was a book I bought as part of my hopelessly optimistic glut to take on holiday with me. It seemed very apt given I was going to Kenya and... I liked the font on the cover!

A Guide to the Birds of East Africa

is by Nicholas Drayson who lived in Nairobi for a couple of years. It's a gentle paced book set in that city that, of course, has been likened to Ladies Detective Agency - probably only because it's set in Africa... 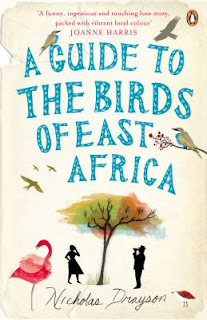 From the blurb: "For the past three years, the widower Mr. Malik has been secretly in love with Rose Mbikwa, a woman who leads the weekly bird walks sponsored by the East African Ornithological Society. Reserved and honourable, Malik wouldn't be noticed by a bystander in a Nairobi street but beneath that unprepossessing exterior lies a warm heart and a secret passion.

But just as Malik is getting up the nerve to invite Rose to the Nairobi Hunt Club Ball, who should pop up but his nemesis from his school days. The jokester Harry Khan, good-looking in a flashy way and quick of foot, has also become enraptured with the object of Malik’s affection. So begins the competition cooked up by fellow members of the Asadi club: whoever can identify the most species of birds in one week’s time gets the privilege of asking Ms. Mbikwa to the ball."

The two men's approach to the contest is very different. Harry Khan approaches the task by enlisting two Australian tourists to help him and then making short trips around Kenya to a variety of habitats to try to see as many species as possible. Mr Malik takes a gentler approach to the contest and has a number of other things to deal with during the week that takes his focus off the contest. I thought this was a nice approach to the story as otherwise it could have been in danger of becoming a trip around Kenyapunctuated by lists of birds!

You don't need to be a bird-watcher to enjoy this book, although I can imagine it would add a layer of enjoyment, and where they are mentioned it's always in an easy, entertaining way. Mr Malik's warm heart makes this story a gentle delight. As an elderly gentleman with what sounds like a quite alarming comb-over, he could so easily have been merely a figure of fun but he's also thoughtful and observant. This is an enjoyable, sweet book that I wish I'd read when in Kenya itself!

An interview with Nicholas Drayson in which he reveals he is working on a sequel... Breaking news from The Bookling indeed!
Posted by Peta at 07:39

Labels: A Guide to the Birds of East Africa, Nicholas Drayson

Ooo you've been to Kenya - what did you do, where did you go, are there pictures?

Excuse the immense excitment but I went last year on safari and loved it!

He he - we went to Kenya in April this year for a couple of weeks. Mainly beach but we did spend a couple of nights in Shimba Hills which is a reserve near Mombasa. Went to Tanzania three years ago for a "real" safari that was incredible and we plan to return to Kenya/Tanzania next year. I do have hundreds of photos and might pop a few up! :D