Yesterday our Alphabet Weekend activity (as chosen by Mr B) was cycling!

As I've not actually been on a bicycle for around ten years, the original plan was to drive down to Thetford Forest and enjoy the off-road tracks there but the staff at Bike Art were so incredibly rude and unhelpful to my husband that we refused to support their business by renting from them and we switched to Plan B. Which was to borrow two bikes from my mother! One trip to Halfords for a new inner tube later and we were off. 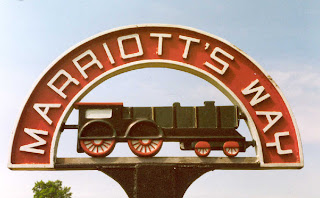 We've walked our dogs from the centre of Norwich to my mother's house a few times along the start of the Marriott's Way, which is also part of National Cycle Network Route 1, and it follows the track-bed of a decommissioned railway line from 1883. We decided to explore this traffic free route a bit further along and cycled from Hellesdon to Thorpe Marriott (and back). The route does cross the road a couple of times but this was no problem at all and where the road was busy there was a horse and bicycle crossing. 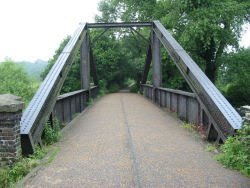 One clear advantage of a route along an old railway line (and living in Norfolk) is that it is generally very flat which was a definite bonus - see below for evidence! I'm really pleased that we went cycling so close to home - the start of the Marriott Way is under 1/2 mile from our home and it really is a lovely route that starts off along the River Wensum and then winds through fields. 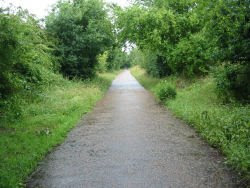 I'd love to explore further along the route as we stopped for our picnic at what turned out to the last bit of the "urban" section before crossing the fields towards Reepham. I'd like to cycle the whole route but my saddle-sore bottom might need to recover before I can even contemplate getting back onto a bike any time soon!

(Route pictures from the Wensum Valley Trust's website and the sign was from Peter Boggis's account of a trip he took along the route in the 1990s. )
Posted by Peta at 08:53