Having looked back to see what the first book I read in 2008 was, and discovered that it was Maggot Pie

by Michael Lawrence, I felt under considerably less pressure to make my first read of 2009 a thoughtful one... My choice was also limited as I took all five (yes - just FIVE) of my books-I-got-for-Christmas pile to Tynemouth with me and given I'd already finished the Janice Cross's Temple Dragon Saga, I just put the remaining two under the duvet and picked one at random! 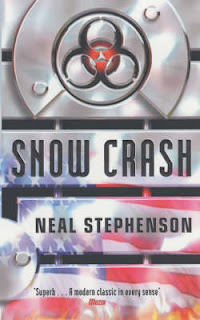 So out came Snow Crash

which was published in 1992 and was Neal Stephenson's breakthrough novel. It is set in a not-too-distant future California where the United States has become a patchwork of corporate-owned city states. People now live in “Burbclaves” or franchised citizen groups (such as Mr. Lee's Greater Hong Kong) which are run as independent legal entities and the Internet has now become a realised virtual reality called the Metaverse.

One of the early coders for the Metaverse is Hiro Protagonist - hacker, samurai swordsman and (initially) pizza-delivery driver for the Mafia. One of his fellow hackers, Da5id, falls victim to a dose of Snow Crash which is a virus capable of crashing both computers and people. Hiro joins forces with Y.T. a very likable fifteen year old skateboard kourier to investigate the virus and uncover who is responsible for the spread.

This book's future setting feels strangely plausible and I loved the idea of major corporations providing services previously supplied by government - such as competing highway agencies and security services. What is particularly impressive is that the book was published in 1992 which is well before much of what is mentioned became real such as the use of online Avatars and MMORPGs. The ideas expressed are really creative and certainly makes you wonder what would happen if the FBI became a general service supplier!

A trait I noticed when I read Cryptonomicon last year was that Stephenson is very good at imparting vast amounts of information in a (usually) interesting manner. I say usually as sometimes the data-dump about Sumerian mythology and culture, archaeology and the Tower of Babel was a little intrusive and I felt it halted the flow of the story unnecessarily. Having said that, it was mostly relevant and interesting although I must confess I did skim short chunks later in the book to get back to the story. Which could be viewed as a compliment!

Stephenson's style is clever, enjoyable, unique and this is an enjoyable story that does not take itself too seriously whilst also managing to make some serious points. Based on the two books I have read, this is definitely an author that could make my "Top 10" list and I really need to go on a long (warm) holiday so that I can read his huge Baroque cycle! Well. That's my excuse anyway.