The Gates of Ivory, Margaret Drabble

In a stroke of genius, it was only after I finished The Gates of Ivory that I realised that it was the concluding volume in a trilogy following the same group of friends during the 1980s . Given I did not realise this whilst enjoying the book I'm either dimmer than I thought or the characters were perfectly formed in their own right. Clearly, I am plumping for the latter option... 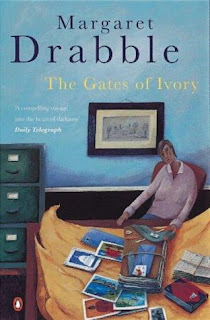 Two years ago - or was it more? - novelist Stephen Cox vanished to the east. There had been postcards, then silence: now Liz has received a strange parcel of jottings, bills, pictures and bones. Enlisting the help of another of Stephen's friends, Hattie Osborne, Liz begins to decipher his trail.

Stephen has left the UK with the intention of contacting the Khmer Rouge in Cambodia and has made only the vaguest contact whilst he has been away. Whilst at first Liz and Hattie are not sure what to make of the parcel, they soon begin to worry that something has happened to Stephen and start to investigate his movements and speak to people who saw him.

The narrative of this story swaps between character points of view and also weaves between the Far East and England and, to cap it all, features a fractured chronology but this is not nearly as confusing as it sounds! Each voice is unique and it's easy to work out who has taken over the reins. This book is incredibly detailed, clearly thoroughly researched and gripping. I'd absolutely recommend it and fully intend to catch up on the first two books in the trilogy as I am confident that reading them in order would add another layer of depth to the characters that I missed this time around. Or rather, did not miss at all but would enjoy none the less...

Random bonus fact: Margaret Drabble and I share the same birthday. Hurrah.
Posted by Peta at 08:05