A confession. I've never read anything that Penelope Fitzgerald has written. She came to writing late in life and was short-listed for the Booker prize three times, winning it eventually with Offshore. Her collected letters

have recently been published and seeing some of the blogger buzz about that I decided that I really needed to read at least one of her works this year. 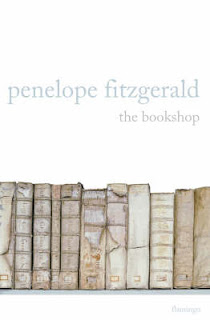 Set in the small, claustrophobic and almost cut off seaside East Anglian village of Hardborough, The Bookshop

was Penelope Fitzgerald's second book and was one of those three short-listed for the Booker Prize.

Florence Green is a middle aged widow living in the village and she decides to use what's left of her savings, along with a bank loan, to buy an unused building in the village and open a bookshop - a venture that's against viciously polite local opinion. Florence encounters both opposition and support from other villages but throughout the book you get the feeling that this is a commercial venture that nobody actually requires. Florence battles on regardless and invests not only her life savings but also a lot of emotional commitment into the bookshop.

This is a short, haunting and beautiful work where Fitzgerald's sparing use of words and understated observation tells a much bigger story than the one on paper. I thought that this was a really good introduction to her work and I look forward to reading more of her books this year.
Posted by Peta at 10:55