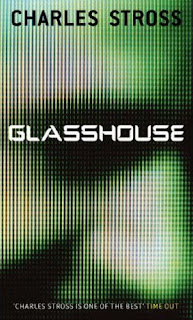 The blurb: "When Robin wakes up in a clinic with most of his memories missing, it doesn't take him long to discover that someone is trying to kill him.

It's the twenty-seventh century, when interstellar travel is by teleport gate and conflicts are fought by network worms that censor refugees' personalities and target historians. The civil war is over and Robin has been demobilized, but someone wants him out of the picture because of something his earlier self knew.

On the run from a ruthless pursuer and searching for a place to hide, he volunteers to participate in a unique experimental polity, the Glasshouse. Constructed to simulate a pre-accelerated culture, participants are assigned anonymized identities: it looks like the ideal hiding place for a post-human on the run. But in this escape-proof environment Robin will undergo an even more radical change, placing him at the mercy of the experimenters, and of his own unbalanced psyche ..."

Set several hundred years in the future, humanity has abandoned Urth to live in artificial habitats scattered throughout space. These are linked by T-Gates which transfer matter, and people, instantly however are subject to one fatal flaw - the civil war referred to in the blurb was triggered by a dormant virus called Curious Yellow that was smuggled into the gates that infected people passing through...

that Robin signs up for is a sociological experiment that puts small groups of volunteers into a late 20th century inspired closed environment for up to three years. Participants earn social points for their groups by conforming to social norms from that era and it's particularly sinister to see how important "winning" becomes for some participants and how extremely easy it is to manipulate a group of people into doing things that they would have previously not considered.

With a strong plotline, great characters and a couple of nice twists, this is a really enjoyable thriller and another great Sci-Fi experience read for me. It's a compelling depiction of society in the future and an interesting take on humanity in the 20th century that made me also realise how utterly illogical some of our cultural habits will seem to future generations.

Glasshouse was the first book by Charles Stross that I have read and he is definitely another author I need to explore further and, luckily for me, he has a fairly large back catalogue to catch up on!
Posted by Peta at 16:19