and, a year later, for a sequel called Speaker for the Dead. I admit that I have resisted reading any of Orson Scott Card's work for some time now as I find some of his personal views unappealing. For me, that opens up an interesting debate - should you actively boycott an author whose work you enjoy but whose politics you don't? A few months ago I was very adamant that I was never going to read a book by Orson Scott Card and therefore, by default, support him. Then, when I joined in with the Sci-Fi Experience, I had a think about what that really meant as this is definitely one of "the" books that everyone who is into Sci-Fi should read at some point...

Am I saying that because someone stands up and states their views in public and if I don't agree then I refuse to engage with them? I would hope not. Also, does disagreeing with someone mean that I can't enjoy their work? I then thought about other books I enjoy and I have absolutely no idea what the political, or religious, beliefs of my favourite authors are and, to be honest, have very little interest either. I seem to have veered rather off topic on this one. I think I have decided to keep the pleasure of reading and author politics/actions separate as, although I am happy to engage in debate in the right forum, I suspect this is not it. 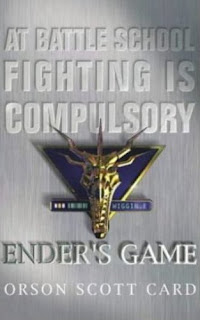 Erm - tangental rant over. So. I decided to read Ender's Game as it seemed like the perfect time to do so!

What's this book all about then? From the blurb: "Ender Wiggin is Battle School's latest recruit. His teachers reckon he could become a great leader. And they need one. A vast alien force is headed for Earth: its mission, the annihilation of all human life. Ender could be our only hope. But first he must survive the most brutal military training programme in the galaxy..."

Ender is six years old when he is taken away from his family and recruited into Battle School. As a Third he is already a unique child (most people living on the very cramped Earth are only allowed to have two children) as his parents received special dispensation to be allowed to have another child as their previous two were so promising. This is something of a poisoned blessing as his jealous, and competitive, elder brother makes life very difficult for him and it's his relationship with his sister that keeps him grounded. The story follows Ender as he quickly has to grow up and deal with fighting for recognition in Battle School and struggling against the deliberately engineered sense of isolation from his peers. We also keep abreast of developments in his family and I gather that sequels touch on them too.

I really, really enjoyed this book. I am so glad that I read it as it's what accessible Sci-Fi is all about. A great story (that I literally could not put down), a well imagined future, a skewed political system and some interesting ethical choices. If you think you could be tempted into Sci-Fi then definitely try this book. Or Old Man's War by John Scalzi.
Posted by Peta at 18:01