was Neal Asher's first full-length SF novel and is an accomplished fast-paced action thriller crammed with intriguing technology, fascinating characters and packed with weapons. The central character is long-time Polity agent Ian Cormac who, in the early stages of the book, is struggling to deal with the realisation that he has been dehumanised by thirty years of being plugged into the AI network - also known as being Gridlinked. 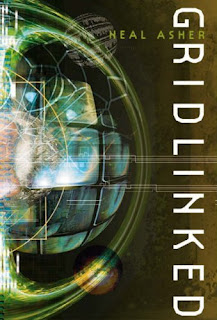 The Blurb: "In outer space you can never feel sure that your adversary is altogether human. The runcible buffers on Samarkand have been mysteriously sabotaged, killing many thousands and destroying a terraforming project. Agent Ian Cormac must reach it by ship to begin an investigation. But Cormac has incurred the wrath of a vicious psychopath called Pelter, who is prepared to follow him across the galaxy with a terrifying android in tow. Despite the sub-zero temperature of Samarkand, Cormac discovers signs of life: they are two 'dracomen', alien beasts contrived by an extra-galactic entity calling itself 'Dragon', which is a huge creature consisting of four conjoined spheres of flesh each a kilometre in diameter. Caught between the byzantine wiles of the Dragon and the lethal fury of Pelter, Cormac needs to skip very nimbly indeed to rescue the Samarkand project and protect his own life."

Generally, I find that copying a book's blurb helps to explain what the story is about but I really don't think that's the case in this instance! In summary, it's in space, there's a clever secret agent, sneaky weaponry, an evil psychotic villain complete with android sidekick (the fabulously intriguing Mr Crane) a mystery and a hint of a romance. What's not to like? I liked the character development and the tech featured in the book was really well thought through although I'd have liked to see more about the ethics of creating superhuman "Golem" androids and whether, like Mr Crane, they are capable of operating outside of their programing. Like The Culture, from the books by Iain M Banks, this future is controlled by omnipotent AIs rather than the humans and I rather like that premise and I suspect the "Earth Central" computer is playing a very long-view game.

I gather that Ian Cormack stars in subsequent books and I'd be interested in finding out what happens to him next as the book's ending was intriguing. Neal Asher is definitely an author I am really pleased to have "discovered" - which, I suspect, is the benefit of taking part in something like the Sci-Fi experience and expanding your reading horizons!
Posted by Peta at 08:20

Earth Central is certainly playing a long-view game - about five books long. Glad you liked it.

Thanks for popping in! I will definitely check out what Earth Central is up to as I look forward to reading the rest in this series.