but a review I must have read as, even though I have absolutely no recollection of ordering it, it arrived, along with books I do recall ordering, a couple of weeks ago. Which was quite handy as I was beginning to wonder if only boys write Sci-Fi... The only previous work by Ursula Le Guin I've read was The Earthsea Quartet

* and I did not realise that she was also famous for being such a prolific Sci-Fi author. 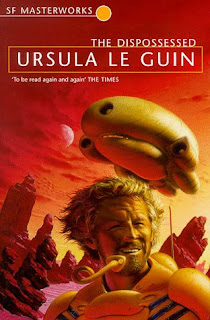 The Dispossessed centres on the life of brilliant physicist Shevek and the chapters alternate between his experiences on his home moon, Annares, and it's twin planet Urras. This alternation also means that narrative moves between time and the book ends just before the first chapter. Which might sound a bit confusing in theory but really isn't in practice! Annares was settled a couple of centuries before the story starts by revolutionaries from Urras who wanted to create a more equal society and since that point it has cut itself off from Annares and, by default, the rest of the Universe.

The people of Annares are cash poor but rich in the sense that they all understand the role they play in society and work towards a shared, idealistic, goal. Urras is the seat of capitalism and the nation of A-Io (who sponsor Shevek when he throws over tradition and leaves Annares) flaunts all that is bad about material wealth under the dawning gaze of Shevek. This is not to say that Shevek is blind to the flaws of the ostensibly non-political Utopian ideal present on his home planet of Annares but that Shevek as the outsider is able to see the system more clearly than those living within in.

The Dispossessed was published in 1975 and won both the Hugo and Nebula awards in that year. The ideas so clearly illustrated in this book are what makes it special and it certainly makes the point that no political system is without flaws well. I took a course in political thought then I was at University and it was interesting to contrast this book with the nuggets of knowledge that I have managed to retain from those dim and distant days!

I digress. If you fancy a taster, Harper Collins have the first chapter online.

* Which reminds me - should I see the Studio Ghibli film "Tales from Earthsea" or not? I've read mixed reviews and just can't decide...