, with it's gorgeously illustrated cover, that's been languishing neglected on my shelf for too long. This book managed to be on both Richard and Judy's summer reads list and the Man Booker long list. 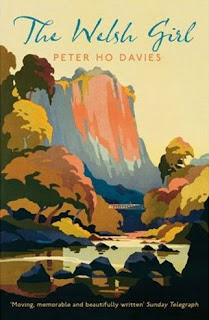 From the blurb: "In 1944, a German Jewish refugee is sent to Wales to interview Rudolf Hess; in Snowdonia, a seventeen-year-old girl, the daughter of a fiercely nationalistic shepherd, dreams of the bright lights of an English city; and in a nearby POW camp, a German soldier struggles to reconcile his surrender with his sense of honour. As their lives intersect, all three will come to question where they belong and where their loyalties lie."

I'm really not sure that the above gives a good feel for what this book is really about. It's an odd mixture of slightly interlinked stories and I felt that the two characters I learnt most about were Esther Williams, the titular Welsh Girl, whose father farms sheep whilst she works in the village pub (because she can speak English and serve the soldier) and Karsten, a German POW who is battling with his shame and self-loathing at letting himself be taken prisoner. I'd expected more of a story from the Rudolf Hess aspect of this book to be honest and don't really understand why he's a character in it other than to allow facts about Nazi Germany to be placed into context.

There are some very strongly portrayed side-characters - I liked the pub landlord Esther's father is a complex, and difficult man to live with, and I really felt for Jim, the young evacuee who lives with them, and his attempts to integrate with the Welsh community. I'd also love to read a book about Mary, who is a BBC radio entertainer broadcasting from the relative safety of Wales and understand more about what lies beneath her brittle humour.

To try to explain what this book is about, and what it meant to me, I scrawled some notes: importance of landscape, sense of place, the meaning of patriotism, identifying the real enemy, belonging to a group or community, responsibility for the expectations of others, isolation. Sadly, not a very helpful exercise to shortcut pulling together actual sentences but I've struggled to put it any more clearly.

This book is beautifully written, and some of the prose is gorgeous, however ultimately it is somehow lacking in heart. I think that Peter Ho Davies is a very talented writer but that this book ended up being about the technique rather than the soul of a story - not sure that makes sense but luckily it's my blog so I can write what I like :)
Posted by Peta at 07:20