Another author I’ve seen featured a few times over on the Book Smugglers blog is Lisa Kleypas and whilst I was browsing in my local library, I saw that they had a few books by Kleypas on the shelf. I really feel in the mood for a decent batch of escapist and frivolous reading so, committing to the experience, I picked up copies of Mine Till Midnight

to go with the Loretta Chase books I posted about earlier this week. 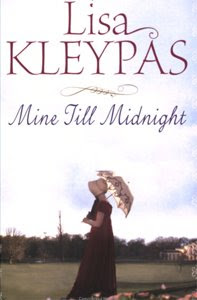 According to the back cover, Mine till Midnight is the first in a series of books presumably centred around the Hathaway family. He is Cam Rohan - handsome, strong, commanding, manly and possessive. She is Amelia Hathaway - the beautiful eldest of four impoverished but gentile sisters who has shouldered the responsibility for holding her family unit together following the death of their parents and the descent of her elder brother into dependency on alcohol and drugs. They are irresistibly attracted to each other...

The twist is that he is a half-gipsy who, for reasons he still does not understand, was turned out from his tribe whilst young. Since that time he has made a financial success of himself and mixes with powerful people however he is not quite comfortable fitting in with his position in society and hankers for a simpler life on the road.

I’d suspect that Amelia's sisters will feature in future novels in this series of and that there is potential for the back history of her sister, Win and Merripen (another abandoned gypsy with a mysterious tatoo who was taken in by the family as a child) to be explored in more depth. 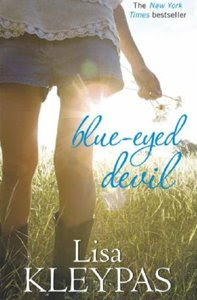 The second Lisa Kleypas book I read was Blue Eyed Devil which turned out to be a sort-of-sequel to a previous book called Sugar Daddy but I don’t think it really mattered that I’d not read that. This is the first of my “romantic reading” books this week to have a contemporary setting though as the location is Texas, it still felt suitably removed from normal life. The fact that it was set in present time did mean that initially I was more drawn to compare it with that guilty pleasure of my teenage years – the Mills & Boon novel!

Haven Travis is the only daughter of oil magnate and has led a sheltered and privileged life but not one without its own difficulties. Keen to assert her independence, and to prove that she is capable of making her own decisions, she elopes with her college boyfriend Nick and her father cuts her out of his life as he is convinced that he is only with her for her family’s money. The marriage does not go as expected and Haven finds herself trapped in an abusive relationship which she has to escape from. Helping her to recover confidence in herself as an attractive and capable woman is Hardy Cates enemy of the family, who is (yep – a clear trend developing here) also sexually active, handsome, strong, capable and all man! Oh - and he has blue eyes but I am not entirely sure why he would be called a devil.

My hat goes off to Kleypas for managing to combine an authentic story of someone in an abusive relationship with the contrasting lightness of storyline required for a developing passionate romantic attachment.

The second books is Seduce me at sunrise and as you said it's on Win and Merripen, and it's really good.

The third book on Poppy is releasing this September. I'm just so excited :)

I found both books great fun and I'll keep an eye out for Seduce me at Sunrise! I would imagine that if you like Lisa's work then you'll also enjoy Loretta Chase's who I've also been reading this month.