short and sweet as surely everyone has read, if not the book itself at least one post about it by now! I had the pleasure of reading this book in one evening which is a rare treat indeed. I got in from work and had a lovely bath whilst reading it. Then continued reading it in the kitchen whilst munching on ginger cake. Finally I moved into my new snug where I sat in one of our new winged armchairs and , accompanied by two small dogs and a glass of wine, finished it off. It was a fabulous evening and a winning formula that I intend to repeat! 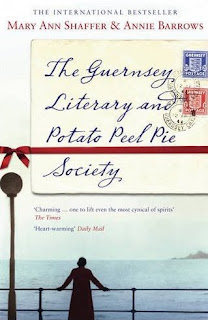 So - on to the book "It's 1946 and author Juliet Ashton can't think what to write next. Out of the blue, she receives a letter from Dawsey Adams of Guernsey - by chance, he's acquired a book that once belonged to her - and, spurred on by their mutual love of reading, they begin a correspondence. When Dawsey reveals that he is a member of the Guernsey Literary and Potato Peel Pie Society, her curiosity is piqued and it's not long before she begins to hear from other members. As letters fly back and forth with stories of life in Guernsey under the German Occupation, Juliet soon realizes that the society is every bit as extraordinary as its name."

Before starting, I'd not grasped that this novel is told in a series of letters between a London-based author, her friends and the members of a Guernsey book club. After a couple of failed attempts to read Dangerous Liaisons I tend to avoid epistolary novels but I can firmly state that this book is really, really charming and was a joy to read from cover to cover.

The very recent Nazi occupation that the inhabitants of the Channel Islands had lived under was something I only had the vaguest knowledge of and the simplest of stories about those years recounted by the various letter writers really moved me. The variety of characters themselves are honestly delightful and I thought that the balance between humour and sorrow in the letters was just about right.

I received a copy of Libby Cone's novel War on the Margins, which is set on Jersey during WW2, through the post a couple of weeks ago and I think that will make a really interesting companion read to this one.
Posted by Peta at 08:21

That sounds like a lovely relaxing way to spend a night, it is one of those books you can read in one, luxurious go. Must get my own review of this one up soon.