Loretta Chase is an author whose name I have seen appearing on The Book Smuggler’s blog several times and when this week featured an interview with her, along with a link to their review of her new book, I though it was about time to see what all the fuss was about. I stumbled upon Miss Wonderful and Mr Impossible in the library, which are the first two books in Chase’s “Carsington Quartet”, and decided that they would make a marvellous starting point.

I say stumbled upon. I actually checked the online catalogue to see if books were in stock first and then searched for books by Loretta Chase in the romantic novel section as indicated. These books are irritatingly mixed up as a sub-genre on revolving carousels rather than neatly arranged by author and I had no initial luck but then finally tracked these books down in the main fiction area where, of course, authors are properly alphabeticalised. I could get into a side ramble about the difficulty of locating books in a large city library where they create these sorts of genre zones that they don’t then stick to but I shall spare you. For today. 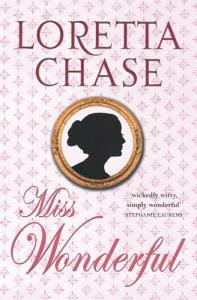 And on to the books! First up is Miss Wonderful

, which features my favourite type of romantic hero - The Reformed Rake. The third son of the Earl of Hargate, 29 year old Alistair Carsington has been falling in, and out, of love with unsuitable women for years and it’s costing his exasperated father a fortune. His father gives him an ultimatum – marry an heiress or he’ll sell of his younger brother’s inheritance to fund his lifestyle. In a bid to remove himself from the path of temptation, and to prove that he can earn his own money from a business venture he’s entered into with an old friend who saved his life on the battlefields of Waterloo.

Arriving in Derbyshire, he meets Mirabel Oldridge – a woman who dresses so unflatteringly that undressing her is “practically a civic duty”. Mirabel has taken on the responsibility for running her increasingly eccentric father’s estate and the last thing she needs is a stunningly attractive aristocrat arriving on her doorstep and reminding her she has a heart. Their romance develops and it was very refreshing to read a novel where the almost obligatory misunderstanding between a couple on the cusp of developing a relationship was missing. Alistair himself was not quite arrogant and rakish enough to be quite my dream book hero but his charm won me over. 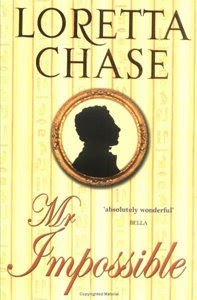 Alistair’s younger brother, the dashing, reckless and permanently in trouble Rupert, is sent to Egypt by his long-suffering father. Daphne Penbroke is a highly intelligent Egyptian scholar however, with her brother’s help, disguises her research as the product of his mind rather than hers. Daphne’s brother is kidnapped and an ancient scroll she was studying is stolen from their home so she turns to Rupert to help her to rescue her brother.

Both books are great fun with heroes who are Real Men and heroines who are intelligent, strong, capable and independent. Loretta Chase has a delightfully wicked writing style and the exchanges (both verbal and physical) between her lead characters are a delight.