G is for Great Yarmouth! 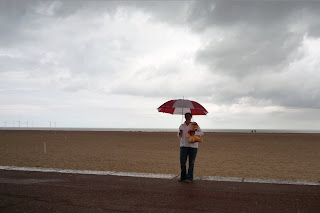 In a bold move, Mr B's alphabet weekend activity was a trip to Great Yarmouth. I do have to say that the tourist board have done a great job with that website as it successfully glosses over the seedier aspects of an outdated seaside resort and this link is a lot more realistic!. Having said that, and now feeling a little unfair, I should say that it's clear that a lot of money has been spent on re-vamping the sea front and it's considerably better than it was last time I went there.

I confessed that somehow I'd never experienced the pleasure of vising the Merrivale Model Village and Mr Banks insisted that we fork out £5.50 each (!!) and explore the acre of "captivating model village and its charming inhabitants". I actually really enjoyed the experience and there is something awfully English about obediently following a winding path (in the rain) and admiring the effort that has clearly gone into creating this attraction.

Next up it was a walk along the sea front (as the tourist information site explains "Frequently called The Golden Mile"), and along to Britannia Pier where Mr B decided he had to attempt to win me a teddy bear on the grab machine. 60p later and I was the slightly embarrassed recipient of a very large, and to be honest unexpected, Winnie-the-Pooh. No shame no gain so proudly clutching my new friend it was a quick ride on the Ghost Train before fish and chips looking out over the beach/Scroby Sands wind turbines - and at the black clouds rolling in. See pic for both evidence of delightful British summer weather at the beach and Mr B's grab machine prowess!

We finished off our trip with a game of Adventure Golf. Which I was comfortably winning until the last two holes when it all fell apart for me - serves me right for starting to gloat. :( We didn't have time to check out Great Yarmouth's newly re-developed Heritage Quarter but as we've been told that the Time and Tide museum is a must by my father-in-law so perhaps it'll get slipped into a weekend later this year...
Posted by Peta at 09:34

I haven't been to Great Yamouth for years, although Southend last year reminded me very much of the highs and expensiveness of a day out at a seaside like this

Yep that looks about right for the Great British summer. Impressed your husband only had to spend 60p to get you a bear, pounds and pounds had to be wasted to win a very large cow the last time anyone I know played.

This is an excellent blog post; I think there’s some excellent information here.

Just a small piece of advice, if your looking for accommodation in the Great Yarmouth, then Take a look at this website, it lists 100s of hotels and bed and breakfasts. I’ve used it lots of times and it always seems to deliver.

For accommodation in Great Yarmouth remember to visit this website. I found it to be very useful