Last month I read, and enjoyed, Sophie Hannah's The Point of Rescue so I thought I'd give one of her earlier two books a go when my sister unearthed Hurting Distance

for me when we did a bookshelf sort at her place. 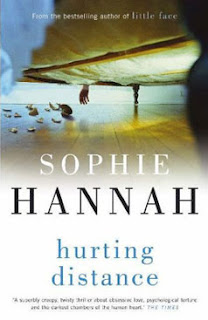 The synopsis: "Three years ago, something terrible happened to Naomi Jenkins -- so terrible that she never told anybody.Now Naomi has another secret -- the man she has fallen passionately in love with, unhappily married Robert Haworth. When Robert vanishes without trace, Naomi knows he must have come to harm. But the police are less convinced, particularly when Robert's wife insists he is not missing.In desperation, Naomi has a crazy idea. If she can't persuade the police that Robert is in danger, perhaps she can convince them that he is a danger to others. Then they will have to look for him -- urgently. Naomi knows how describe in detail the actions of a psychopath. All she needs to do is dig up her own troubled past ..."
I'm really not too sure about this one and for me, that's because of the plot's subject matter - is it weird that I find that a story about fratricide (The Point of Rescue) more palatable than one about abduction and rape?

I won't go into details but I was unconvinced by the motivation of some of the key characters and felt that some actions were pretty implausible although I concede that the book whizzed on at a fair pace. I felt that the dealing with the emotional impact of rape on the women involved, which I accept it needs to be to write a fast paced thriller, was just too insensitive for me and I never got the impression that anyone really cared how the women were bearing up.

An aside. I'm working backwards in this series so I found the sometimes unexplained emotional antics of Sgt Charlie and DC Waterhouse more irritating and less forgiveable than I did last time. They seem to be the same "issues" as they had in the third book which was a bit odd. As far as I cab see, they don't appear to be central characters to these books and I can't see that the thread following their relationship is required to make the book any more exciting so my vote would be to either ditch them entirely or make them as equally important as the crimes they are investigating. I can't help comparing them to the police staff in Susan Hill's Simon Serrailler books and reflecting on the very different approach the authors have taken. Rant over.

In summary - every other review I have read for this book is very positive so I suspect it's a case of "not for me".