The Point of Rescue - Sophie Hannah

After reading a review of Sophie Hannah's The Point of Rescue over on vulpes libres, I forwarded the article to my sister suggesting she might enjoy it. She replied to say that she'd already boughtit, read it and kindly offered to lend it to me. As if I could resist such temptation... 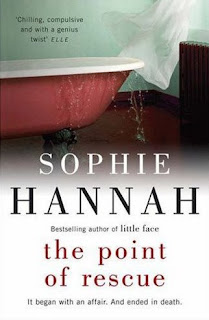 And on to the plot:

Sally Thorning is watching the news with her husband when she hears a name she never thought she'd hear again: Mark Bretherick.

It's a name she ought not to recognise. Last year, a work trip Sally had planned was cancelled at the last minute. Desperate for a break from her busy life juggling her job and a young family, Sally didn't tell her husband that the trip had fallen through. Instead, she treated herself to a secret holiday in a remote hotel. All she wanted was a bit of peace - some time to herself - but it didn't work out that way. Because Sally met a man - Mark Bretherick.

All the details are the same: where he lives, his job, his wife Geraldine and daughter Lucy. Except that the photograph on the news is of a man Sally has never seen before. And Geraldine and Lucy Bretherick are both dead...

...and if that's not a synopsis that makes you want to read on I don't know what will! The Point of Rescue

is Sophie Hannah's third psychological thriller and it certainly makes for an original and entertaining read. The plot bowls on at a great pace with plenty of dramatic twists and turns but for me the most interesting sections were those giving differing viewpoints on motherhood. Some of it makes for fairly uncomfortable reading and I am sure it's quite close to the bone for some women.

Hopefully my sister has now bought Sophie Hannah's other two novels, Little Face and Hurting Distance, as I think I would rather enjoy reading more. It also might help to contextualise some of the, frankly confusing, sub-plot centred around two of the police characters, Simon and Charlie, which felt very out of place amidst the more interesting crime story line!
Posted by Peta at 09:23

I have Hurting Distance,I may have to dig about in my book mountain to find it tho..

Excellent news! No rush as I have a fairly extensive "planned out" TBR pile - mainly thanks to the RIP challenge.

Just realised this means I can read her books backwards. Genius.