Cor Blimey. This one was not quite what I was expecting from the man who wrote The Girl at the Lion D'Or

, which I read last year, should have given me a hint that he's moved away from a wartime setting and towards the workings of the human mind. 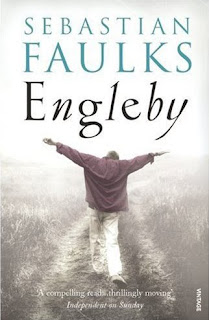 The titular character of Mike Engleby

is a complex and unhappy young man who self-medicates on a cocktail of drink and drugs. This book is told entirely from his point of view which enables us, as readers, to decide if we entirely believe him or not. He's clearly not a man who is comfortable in his own skin and he's also not skilled at even basic interaction with others. Despite these character flaws, it is hard not to empathise with him as he recounts his awful experiences as a scholarship student at bording school and his continued social isolation as an adult.

Whilst he is at University a female undergraduate whom he is in (unrequited) love with disappears and we follow Engleby's thoughts as he tries to get to grips with the situation as well as dealing with the, perhaps inevitable, investigative spotlight turning on him.

I would have loved to read this as part of a group challenge where you all get to the same point of the book. Stop. Discuss what you think is going on, and how truthful you feel that Engleby is being, then move on to the next section. I'd love to revisit those impressions at the end to see how accurate I was in my interpretation! For me, that was a large part of the pleasure of reading this book - you couldn't be quite sure just how accurate Engleby's recollections were. At times he was very specific however at others vague and I enjoyed pausing to reflect on why that might be during the book.

I'd certainly recommend this not entirely comfortable read but don't expect it to be in Faulks' usual style. Want more? Pop in and visit Sebastian Faulks and admire his new not-finished-yet website.
Posted by Peta at 09:27