The Book of Lost Things

was a slightly whimsical purchase that I bought solely because the title intrigued me. Of course, I didn't actually buy it myself as I am not allowed to buy more books at the moment, but I ensured that it was bought for me which is totally different. 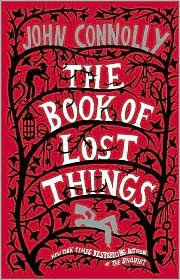 The first chapter of the book observes the reaction of twelve year old David as he watches his mother slowly die and his attempts to delay the inevitable. This is possibly the most moving depiction of the loss of a mother that I have ever read and it had me in floods of tears. I've found an extract here if you are feeling brave.

David retreats into his own world in an attempt to cope with both his mother's death and the impact of his father starting a new relationship that results in the birth of a baby brother. Gradually the fantasy and real world start to merge and David enters a twisted land that's based on twisted versions of fairy tales...

For me, this book started out really promisingly and, until about half way through, I was really enjoying reading it. When trying to understand why I sort-of-lost-interest I decided this... I think it's because the device of taking fairy tales or characters that David would have known and placing them into the other world was more intriguing than our young hero's quest... For example, I was waaaaay more interested in following the lives of the communist version of the seven dwarves pandering to a hideously self-centred Snow White that David encounters than following him on his journey and I doubt that's a good thing. Having said that, the story did move along at a good pace and I was never in danger of abandoning it. Perhaps I've just read too much fiction where traditional folk tales are skewed and someone who has not would find the overall experience more satisfying.

This is not a bad book as such and, to its credit, it started and ended beautifully. I do feel that it could have gone so much further in the central part and it's a shame that it didn't. The edition I read had an extremely extensive appendix (about a third of the book!) that contained all of the source fairy tales that occur throughout the book as well as an author commentary which was interesting. The book has its own website (I suspect not suitable for those with light sensitive epilepsy) where much of this additional material, and more, also resides. The author's website is also very informative although, based on what I've read about his other books, it looks as if this book is a change of direction for him.
Posted by Peta at 10:46

What an intriguing book - I've not read much of this ilk, in fact only Barbara Comyns' The Juniper Tree springs to mind - I'd love to have more suggestions!

Are you really ready to enter the world of Sci-Fi and Fantasy? That's probably where most of the titles I've read lurk... I'll have a dig through my bookshelves and come up with a few suggestions though!

Oo, maybe I'm not... I prefer these things in a domestic setting. But if it's borderline...
(Have I asked you this before, and beat a similar retreat?!) Suggestions still VERY welcome. And we'll see...

I've heard similar reports of this book, as well as some really glowing and really scathing ones. Le sigh. I guess this means I have to read it.

Simon - I'm still struggling to pull together a decent list for you but I will, I promise!

raych - Give it a go. I would struggle to see why it'd deserve a scathing review however I can see from other sites that some people do love it and you might be one! :D

I actually LOVED this book (reviewed it this past May), but am happy to hear that you at least liked it. Most of the reviews out there really loved it or hated it. I guess it's just one of those books.

I am starting to feel as though I was a bit harsh on this one! Perhaps it's just that the opening chapter was so emotional that I felt nothing that followed could match it.

For the curious, here's a link to Stephanie's review