As this is not really a book for grown ups, I will put this read into some sort of context... The Roar is aimed at ages 9+ (phew - so that technically does include me) and was one of my niece's tenth birthday presents that she received last week. She very kindly lent it to me as she knows I like SFF books and I promised to read it quickly and let her know what I think. 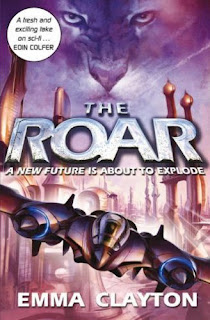 yesterday afternoon and read it straight through until it was finished? So... What's it about? Well.... Ummm.... *takes deep breath*

It's the nearish future and all the animals developed some kind of plague, went mental and started to kill humans so a huge protective concrete wall was erected in the northern hemisphere, the rest of the world was poisoned to kill all the animals and what was left of humanity now huddles together in a grim world of concrete and processed food. The rich live in the upper cities and the poor are crammed together in very basic accommodation amidst rising water levels. Cheery stuff! In this world live twins Ellie and Mika who are part of the first generation of children that have been born in 30 years. Ellie was kidnapped a year ago, but it's not clear why other than that she seems to have a special talent, and her parents believe that she is dead. Mika is sure that he can feel a link to Ellie and is convinced she is not...

Then the government introduces an arcade game called Pod fighter and all the children compete for fabulous prizes with the very best in the running for housing in the golden towers district. Mika and his friends join in the competition and realise that all is not as it seems and that there could be a more sinister motive behind this initiative...

This is a fast-paced thriller featuring very likable young people in an interesting world with an exciting plot. It certainly exceeded all my expectations and I thoroughly enjoyed myself yesterday afternoon! Whilst I freely admit that I am rather partial to Sci-Fi, this is a book that should appeal to absolutely anyone after an intriguing adventure and I hope my niece enjoys it as much as I did.

I tried to find out more about Emma Clayton and discovered that, slightly confusingly, there appears to be a hardback version of this book scheduled for publication next year and she is not listed on the publisher's website. This is a blow for me as I was hoping to find out that a sequel was due out very shortly!
Posted by Peta at 09:40

I shall be reading it before she does, as may be right up my street! Still miffed my borrowing 1st was usurped by her aunt..

That girl knows how to look after her Auntie!

The best book ever :D

the sequel: The Whisper comes out fall of 2011