, was written whilst she was working towards her MPhil in writing at the University of Glamorgan and she's now doing a PhD in Creative Writing at Goldsmiths' College. Knowing that information coming into this book made me wonder if this was going to be a very dry read however that was definately not the case. 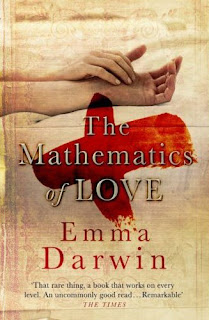 The Mathematics of Love flips between two narrators and their time frame. Teenager Anna has been dumped on an uncle she barely knows, who lives in the dilapidated Kersey Hall in the Suffolk countryside, by her irresponsible mother whose gone to Spain with the latest in a long line of boyfriends. She meets, and grows close, to neighbours Theo and Eva who teach her about photography. This in particular was described in a very enticing way that made me want to pick up my camera and flip it to manual again.

In 1819 we meet Stephen Fairhouse, who has recently inherited Kersey Hall as he witnesses the Peterloo Massacre. Having recently returned to England, after serving in the army during the Napoleonic Wars and then the Spanish Civil War, he is appalled by the charge and, in the aftermath, develops a friendship with Lucy Durward with whom he starts to regularly correspond. Gradually, a close friendship blossoms and he starts to tell her about his life on the continent and about the woman he fell in love with there.

These two stories are never really entwined - years later, Anna reads these letters and that's the only significant link between Stephen and her. Which is a pity, as I had imagined several marvellous plot twists for myself that did not materialise!

The attention to period detail was impressive throughout and the thoughts and feelings of both main characters felt very authentic. I felt that Stephen's story was neatly dealt with and that the loose ends were neatly tied up but that the relationship issues Anna has with members of her family were unresolved. Perhaps this could have worked better for me if it had been two books so that we got plenty of time to concentrate on each character as they had such distinct voices. At times, the choice of descriptive language in this book was really quite beautiful and I look forward to seeing Emma Darwin's future works.

Emma blogs here and recently contributed an interesting article about her next book, A Secret Alchemy

, over here on Vulpes Libres as part of their Richard III week. I'm really looking forward to that one as it not only looks very interesting but it's a historical period that I'm really interested in.
Posted by Peta at 10:23