Shadow of the Minotaur - Alan Gibbons

Shadow of the Minotaur is book one of The Legendeer Trilogy

by children's author Alan Gibbons and it won the Blue Peter Book 'book I couldn't put down' award in 2000. Which shows just how bang up to date I am with the world of youth fiction... 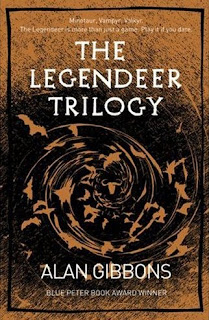 The title of each book in this trilogy refers to a different computer game that opens the gateway between our own world and the realm of myth and legend. Phoenix's father is a game designer working for a mysterious corporation whose new virtual reality game is becoming a little too realistic for his liking.

Following the mysterious disappearance of his father Phoenix, along with his best friend Laura, enters the game and have to complete a quest before advancing to the next level and being challenged to defeat the Minotaur in combat. Drawing heavily on Greek mythology, the story does move at a decent pace without the sections where Phoenix is playing either Perseus or Theseus feeling too educational. Although, I doubt that sentence makes sense to anyone else! The depiction of the Minotaur's lair was particularly effective - you could almost feel the beast snorting behind you!

However, and perhaps unfairly, I couldn't stop myself from comparing this to The Roar which was my just-before read and if I had to recommend one adventure to a young acquaintance it would be that one. I've not finished the trilogy as I felt that the first book was enough of a stand alone story to leave it there but I will probably return at some point to see how Phoenix managed against the Vampyrs!

Alan Gibbons is astoundingly prolific and he also has a blog! He's clearly a passionate advocate of reading for pleasure and the importance of providing young people with the opportunity to access a range of material and it's worth checking him out if you are interested in that.
Posted by Peta at 08:11

Labels: alan gibbons, Shadow of the Minotaur, the legendeer trilogy