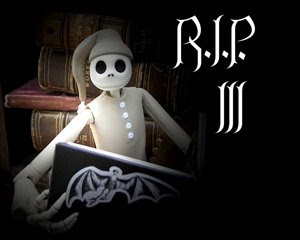 Thanks to Chris over at book-a-rama, I've joined the fun looking RIP III Challenge which runs from September 1st to October 31st, 2008.

RIP stands for R.eaders I.mbibing P.eril and I'm looking forward to this one as it covers the genres of "Mystery. Suspense. Thriller. Dark Fantasy. Gothic. Horror. & Supernatural". I'm aiming to complete Peril the First - which is to read Four books of any length, from any subgenre of scary stories that you choose by the end of October.

So - on to my list! Neil Gaiman's forthcoming The Graveyard Book

is an absolute must although it's released on the 31st October so I'll have to be quick on that one - could this be the excuse I needed to go to London to get a signed copy and hear him talk? Also on my possible reading list are:

- Charles Palliser
The Woman in White

- Wilkie Collins
The Woman in Black

- Susan Hill
We Have Always Lived in the Castle

- John Crowley
The Mysteries of Udolpho

- Diane Setterfield (thanks to deslily)
The Ghost-Feeler

- Edith Wharton (thanks to katrina)

I will read at least four from this list but it could end up being more as there's lots there to tempt me.

Looking at my shortlist, I feel as if I need to add something from horror/dark fantasy or supernatural as I don't read in that genre and it would be nice to do so. I also seem to be the only person in the world who is not or has not read something by Stephanie Meyers... Perhaps this is my time. Any additional reading suggestions would be gratefully received!
Posted by Peta at 09:52

I'm also have The End of Mr Y in my pool. Some good classics on your list

The End of Mr. Y sounds great, hadn't heard of the author before. In fact your entire pool is enticing. So glad you found out about the challenge and are joining in, thanks!

I hope you read the woman in white! I want to read some reviews on that one!!

I'm enjoying reading other book pools and, having popped into both katrina and deslily's blogs, have "had" to add at least two more to mine - The Thirteenth Tale by Diane Setterfield and Edith Wharton's The Ghost-Feeler.

I think I'm going to have a bookish couple of months!

I really enjoyed The Thirteenth Tale when I read it a couple years back. Happy reading!

Great list! I have The Quincunx on my shelf waiting to be read, so if you read that one I'll be interested to see your thoughts!

I keep meaning to pick up a copy of Little, Big. I have heard so many good things about John Crowley's work.

The Thirteenth Tale is an excellent addition to your pool of books, I loved that one.

Can't wait for The Graveyard Book!

I'm looking forward to starting off on my pile of books but just finishing off some other reads first. Does the reading pile ever end? :)

I'm really looking forward to The Graveyard Book. Trying to decide which cover art I want the most and if I can justify a trip to London just to get hold of it a couple of days early... A tough decision!

Hurray for We Have Always Lived in the Castle! And for Northanger Abbey, of course. The Shirley Jackson was one of my favourite reads a couple of years ago.

I've been on the hunt for a cheap copy of "We Have Always Lived in the Castle" since adding it to my list. My current plan looks like a copy via abebooks but I will have a charity/second-hand bookshop trawl first. Luckily, I have a few of my R.I.P. pile to hand so I shouldn't suffer if it takes me a couple of weeks to get hold of it!

I'm glad I brought you to the dark side ;) I love anything by Shirley Jackson.