This is the first book I've read by Jack Vance who is an author I gather I should really have read by now! I was actually looking for his Dying Earth series when I stumbled onto this one in the library instead. I later realised that Lyonesse is book one of Vance's Lyonesse Trilogy but it can also be enjoyed as a stand-alone book however there were a number of very tantalising story threads referred to in the epilogue that have me intrigued! 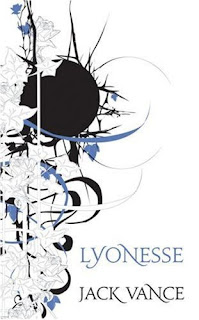 The synopsis: "The Elder Isles are made up of ten contending kingdoms, all vying with each other for control. At the centre of much of the intrigue is Casmir, the ruthless and ambitious king of Lyonnesse. His beautiful but otherworldly daughter, Suldrun, is part of his plans. He intends to cement an alliance or two by marrying her well. But Suldrun is as determined as he and defies him. Casmir coldly confines her to the overgrown garden that she loves to frequent, and it is here that meets her love and her tragedy unfolds. Political intrigue, magic, war, adventure and romance are interwoven in a rich and sweeping tale set in a brilliantly realized fabled land."
The Elder Isles (sited somewhere south of Ireland and west of France) is a mythical country where both humans and faerie live and it's divided into kingdoms ruled by a variety of interpretations on medieval European society. It's a kind of alternative history location featuring myths and legends which makes it hard to explain! In this book there's a love story, a quest of sorts, battles between good and evil, magicians, whimsical faerie folk, an Arthurian backdrop and a host of very plausible characters who are fun to be around. Even the naughty ones.
The first thing that struck me about this book was the sheer variety and inventiveness of the world-building. There is a lot of information to absorb and it's really clear that Vance has put a lot of thought into it. This did have the effect of making the book a bit on the slow side to begin with however as events started unfolding the pace soon picked up and the story threads started to come together.
I left this novel quite sure that I need to read more of Jack Vance's work and I will make sure that I locate a copy of the Dying Earth omnibus. Over on fantastic fiction there is a complete list of his work including some pretty funky cover pictures. I want!
Posted by Peta at 10:36