from Snowbooks is just lovely so I was very pleased when I could admire it from the close up view of a book in my hands rather than as an object on the interweb thanks to the kindness of Mr B. 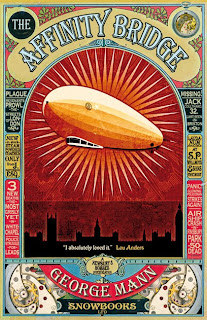 I should give credit where it's due, Mr B had attempted to buy me this edition however didn't realise that he'd clicked on the wrong paypal link until the softback version arrived. He looked so sad when it dawned on him that I forgave and thanked him muchly. Even though my copy isn't the full on fabby one, it's clear that there has been some really careful attention to detail applied to this book which feels like really good quality. I loved the two fonts used for chapter and first letter styling and must dig them both out to use in my own retro projects.

Anyway - on to the book! Our lead characters are Sir Maurice Newbury, who works for the Crown as a gentleman investigator, and his very capable assistant Miss Veronica Hobbes. This book is described as the first in the series of Newbury and Hobbes investigations so I would suspect that we'll meet these two again. There is the hint of a possible romance in this book but I hope that it remains unfulfilled as that's always so much more fun!

The story is set in an alternate London from the very early 1900s where there are airships, ground trains and new fangled clockwork automations. There are also bodies being found in the poor revenant infested alleyways of Whitechapel and then an airship crashes in mysterious circumstances - killing everyone on board...

All I really knew about this book before I started reading it was that 1) I loved the cover and 2) It featured Victorian steampunk. I did have a little wobble when reading the prologue as I was a bit worried that the book might end up being too scary for me but thankfully once I started the actual book my concerns evaporated. It should be stressed at this point that I am unusually sensitive to anything with even a whiff of horror. I enjoyed the gentle development of a relationship between Sir Maurice and Miss Hobbes and the plot itself was fun once I had got over the scary bits. Lots of detecting, chasing and attention to period detail with a twist.

I'll head off on a slight tangent now. Snowbooks gave away a few preview copies over at Bookrabbit a while ago and that kicked off a bit of a stink. I avoided entering the furore at the time but utterly empathised with Emma's post shortly afterwards (which I realise was not 100% to do with this). In my view, I don't think it's on to take a free book just because it's free. You should have the courtesy to read up about it, see if it's something you're likely to enjoy and then say yes. You might not like it, and if that's the case then it's fair to say so, but it struck me that some of the readers who nabbed copies here were never going to enjoy this book - so why bother?

I shall now dismount from my high horse and offer you a bonus feature as compensation... Here's an article by George Mann titled "Steampunk and the Return of Wonder" for Matrix Online.

Edit: There's a review of this book over at Fantasy Book Critic that's worth checking out if you're interested in reading more.
Posted by Peta at 18:56