This is my first post from the "THE ARTHUR MILLER CENTRE INTERNATIONAL LITERARY FESTIVAL, AUTUMN 2008 " line-up. In the future, I shall be referring to this event as the UEA LitFest as that's much easier on the fingers.

As I was sitting on the front row, in my full black tie glory, I decided not to whip out my battered notebook and jot notes during the conversation that Cherie had with UEA Professor Chris Bigsby however I did scribble some pretty indecipherable thoughts as soon as they'd finished as we were queuing to leave the Lecture Theatre. 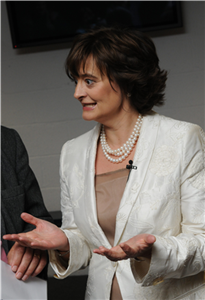 My scrawled comments include the following:


All very insightful, I am sure you will agree... I've not read her autobiography, Speaking for Myself

, however the interview took the form of a gentle conversation that covered her life history to date. I left, after an hour, feeling that I don't actually have an insight into what this, clearly very clever, woman is actually doing and what makes her tick. I feel that it's a shame that she didn't use this as a platform to explain what she's been up to in a context other than being an ex-PM's wife although I am sure that's what sells the book.

Her website is happy to give me glimpses of what the event could have been about (the many causes she supports, her views on human and women's rights, cases she's been involved in...). An example is that when she was asked for her views, as a practicing catholic, on women working as priests, she replied that she would soon be giving a speech at the Vatican on this very topic. But we never found out what her stance is. Why not? I do, however, appreciate that this is a Literary festival so perhaps that was out of scope.

The event was followed by a very lovely gala dinner, which I attended as my father's guest, at The Sainsbury's Centre to celebrate the University's 45th Birthday and announce the appointment of four Jubilee Professors to help to steer the University in the right direction as it approaches its 50th Birthday. Present at the dinner were the great and the good of Norfolk (and me!) and I had a really delicious meal that included a scrumptious pan-fried quail breast on a wild mushroom fricassee and spiced monkfish on sweet potato bombay. I gather Mr B ordered in pizza. :)
Posted by Peta at 18:17