The Word and the Void Trilogy - Terry Brooks

The Shannara books by Terry Brooks were early fantasy reads for me and could well be one of the reasons that I have stayed with SFF books over the years. I read them all several times and loved the magical world that they took me into. I've not read anything by him for several years though and, with the publication of his most recent book The Gypsy Morph, I thought it might be time to catch up on what I've been missing.

I found out that the Word and the Void Trilogy was the first of two prequel series to the Shannara books themselves. Essentially this series and the following trilogy, Genesis of Shannara, explain what happened to create that world and I've added the book synopsis for each one at the bottom of this post. So avoid them if you plan to read the series and don't want to get ahead. 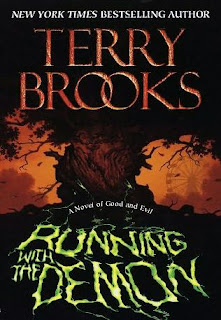 I managed to get hold of the second two Word and the Void books in the library but I could not resist buying a second hand hardback copy of the first book as the cover, as illustrated here, is mind-boggling. But not in a good way! The re-issue editions are definitely easier on the eye if not as amusing.

The Word and the Void trilogy spans 15 years and follows the lead characters of Nest Freemark and John Ross. In each book, John Ross dreams versions of an apocalyptic future and tries to alter the present to prevent these dreams from becoming reality. John and Nest, with others, represent The Word (good) and have to battle various demons sent by The Void (bad). Their stories are placed in an alternate north-western USA setting that uses recognisable cities and locations as well as a, presumably fictional, main town.

So I guess that makes it an Urban Fantasy book. Which is a bit unfortunate as I don't really like that sub-genre. I like alternate history, I love books in the vein of Neverwhere which is also set in our world, I like books with magic in them but I have no interest whatsoever in demons (or vampires, etc) roaming among humans. Unless they're in a "proper" magical world that's not ours of course! Which is a bit of a bother if you have just started a trilogy and may be why I'm not as enthused about the series as I expected to be.

There are a couple of things I want to pick up on about the series when taken as a whole. Firstly, they are very easy to read and I whipped though all three books in a couple of days. This is neither a good or a bad thing but this accessibility no doubt contributes to why Brooks is as popular as he is. I didn't feel that the story line was ever stretching and I no doubt at any point that Nest and John would be successful (although not without cost) and that was a shame.

I found the practice of summarising events from previous books (and even chapters) distracting and, once I'd noticed the habit, really irritating too. I don't see why the third book, in particular, needed to spend so much time explaining what had already happened to these characters when most people would have presumably already read the previous two. Although I am probably wrong, it felt like a trick to increase the overall word count at the expense of the storyline.

So - after this rant, will I be reading the Genesis of Shannara? Yes. But with my fingers crossed that they'll have less filler and a bit more magic.

RUNNING WITH THE DEMON

: One Fourth of July weekend, two men come to Hopewell, Illinois. One is a demon, a dark servant of the Void, who will feed off the anger and frustration of the community to achieve a terrible goal. Whilst families picnic and fireworks explode only John Ross, a Knight of the Word, can change the fate of humanity and save the soul of fourteen-year-old Nest Freemark.

A KNIGHT OF THE WORD

: The years spent saving mankind from the horrors of the Void have taken their toll on John Ross. He's lost his spirit, his belief, and now, it seems his magic. When Nest is once again drawn into the mythic world of the Void and the Word she must warn John to take up his staff of magic once again, or the battle may be lost forever.

: For twenty five years, Ross has single-handedly battled against the legion of demons of the Void. But now he learns of a gypsy morph, whose power and wild magics will be an invaluable weapon against the Void - who know this too and will not rest until the creature has been corrupted - or destroyed.
Posted by Peta at 10:59