Last night I had the absolute privilege of watching Toni Morrison read from her latest book, A Mercy

, and the answer questions from the audience as well as those posed by Prof. Chris Bigsby.Perhaps most famous for Beloved, which won the Pulitzer Prize in 1988, Morrison is also the holder of a Nobel Prize for literature and this was her third visit to the UEA. 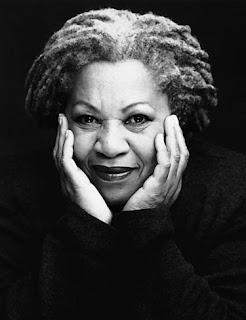 The introduction centred on the theme of slavery and oppression and this seemed very appropriate as the excerpt that she read out was set in 1690, two years before the Salem witch trials, and featured a young black slave Forens, who (as far as I know) is one of the book's central characters. A book from this era struck me as a particularly apt choice given this event was part of the Arthur Miller centre's lecture series and his The Crucible is such an incredibly powerful piece of work. I digress...

In the conversation that followed the reading, she was very softly spoken, was possessed with enormous dignity but also seemed a little weary - she'd appeared at the Cheltenham Festival earlier in the week. One thing that really struck me was how important the choice of precise language seemed to be to her and she described "writing for the ears as well as the eyes" which really encapsulates what I am trying to explain when I say that.

I also could not resist buying a copy of the book for her to sign and I am delighted that I did as somehow I feel like it's a permanent momento of this evening. At some stage I really must post about why a signed book is more important to me than a not-signed one but I am not sure I can crystalise those thoughts just yet. In the meantime, here's an interview with Toni Morrison, talking about A Mercy, with a slightly unfortunate YouTube freeze-frame. Enjoy.