I decided to do a two-in-one post on these two as they are the last two books in David Lodge's "campus trilogy" the first of which, Changing Places, I read earlier this month. I've been reading these books alongside what is turning into a R.I.P. themed month and they have certainly provided me with light relief. 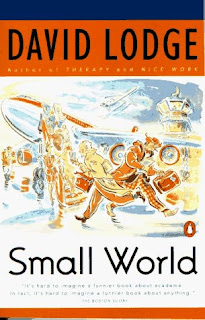 First up, we have Small World

which is set ten years after the events of Changing Places and it touches on the lives of several of the characters featured in that earlier book. They are now living a high old life indeed:

"Philip Swallow, Morris Zapp, Persse McGarrigle and the lovely Angelica are the jet-propelled academics who are on the move, in the air, and on the make, in David Lodge's satirical 'Small World'. It is a world of glamorous travel and high excitement, where stuffy lecture rooms are swapped for lush corners of the globe, and romance is in the air."

This book is more obviously poking fun at the characters, and the availability of funding, than I noticed in Changing Places and it reads almost like a farce. This is not to imply that the books is in any way juvenile in content as at times it's really quite clear how clever Lodge is as he swaps from character to character and highlights both their character flaws and their range of intellect. At the centre of the book is Persse McGarrigle's devoted pursuit of the elusive Angelica Pabst whom he tracks around the world from conference to conference at enormous cost to his financial and emotional well being which allows us to attend most of the conferences on offer as well as to bump into a range of new and old characters. Good fun if not as politically biting as the first one I read. 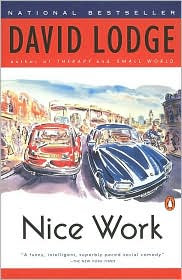 is the last in the trilogy (although it would also work well as a stand-alone novel) and in it we start to see the impact of the huge funding cuts that hit British Universities in the 80s. Long gone are the world-wide conference jaunts from Small World! The story focuses on Rummidge University, where Professor Swallow is now a faculty Dean. We follow Dr Robyn Penrose, who has secured a temporary lectureship in the English department, as she participates in a work shadow exchange project following around Vic Wilcox who is the MD of a local engineering firm. A clash of ideology naturally occurs as Robyn empathises with the "plight of the worker" and Vic questions the business practices that underpin University life.

As I have now come to expect, this novel was both amusing and thought provoking and I am sure that I'll be reading more of David Lodge's books in the future. Such a shame I missed him speak recently. :(

I'm now going to share a random Internet discovery since my last post that involved David Lodge. The Guardian featured him in their Writers Rooms series and I want his study. Look at those lovely shelves full of books with a comfy chair in the perfect spot. So jealous.
Posted by Peta at 19:03