This is a R.I.P. challenge read.

a couple of weeks early and that made me a very happy Bookling indeed. I've been looking forward to reading this for months and, as soon as I got it, I have devoured it - and put the Quiet Room at work to good use. I ended up plumping for the version that Chris Riddell illustrated as I just could not resist the blue cover and I am glad I did as the interior black and white pictures were incredible and really captured the tone of the book. For some reason it's also a bit cheaper than the Dave McKean edition too although I have no idea why that would be. Honourable mention definately goes to the Subterranean Press version that Dave McKean has also worked as it looks amazing - that full cover wrap... *drools* I can't afford the $250 price tag though so I will have to put it out of my mind! 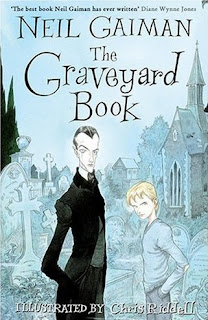 About time I talked about the content of the book rather than its design? OK.

The synopsis: "When a baby escapes a murderer intent on killing the entire family, who would have thought it would find safety and security in the local graveyard? Brought up by the resident ghosts, ghouls and spectres, Bod has an eccentric childhood learning about life from the dead. But for Bod there is also the danger of the murderer still looking for him - after all, he is the last remaining member of the family. A stunningly original novel deftly constructed over eight chapters, featuring every second year of Bod's life, from babyhood to adolescence. Will Bod survive to be a man?"

Well. Not to keep anyone in any suspense, I loved it. It is such a charming story that is inspired by Rudyard Kipling's The Jungle Book. I've not read that in many years but I will definitely dig out my copy to see the links for myself. It feels a bit odd to describe a book as charming that starts with the murder of a baby's whole family and in which no character is ever entirely safe from danger (well, with the exception of the already dead ones!) but that is really the right word for it. Bod's situation is so very unique and the Graveyard is populated with some really interesting characters and that makes this book an absolute joy to read. Looks like the papers like it too.

Neil Gaiman has such a great reading voice (is it weird that I can instantly recognise the voice of someone I have never met?) and I would love to hear him read this book out loud. Now that I've read the story, so am not at risk of seeing any spoilers, I'm going to pop over to Mouse Circus and watch the videos of him reading the book chapter-by-chapter on his USA book tour. In the meantime here's a Wired interview with Neil talking about the book and why he's made those videos: