This is a R.I.P. challenge read.

"Detective Miles Jensen is called to the lawless town of Santa Mondega to investigate a spate of murders. This would all be quite ordinary in those rough streets, except that Jensen is the Chief Detective of Supernatural Investigations. The breakneck plot centres around a mysterious blue stone - 'The Eye of the Moon' - and the men (and women) who all want to get their hands on it: a mass murderer with a drink problem, a hit man who thinks he's Elvis, and a pair of monks among them. Add in the local crime baron, an amnesiac woman who's just emerged from a five-year coma, a gypsy fortune teller and a hapless hotel porter, and the plot thickens fast. Most importantly, how do all these people come to be linked to the strange book with no name?" 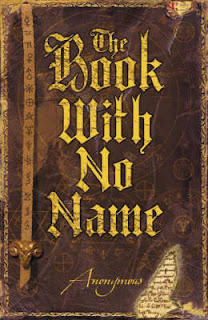 The Book With No Name

was originally a series of regular instalments online (which may explain why the chapters are so short and why the character pov changes so often) before becoming a Lulu self-published book and finally getting a "real" publishing deal and going mass-market. Despite my best efforts, I've no idea who the actual author is, as the copyright says it's by The Bourbon Kid which is the name of one of the characters.

This book is not my usual sort of reading choice but then I suppose that that's what a book challenge is for - to push out the boundaries of your normal comfort zone. It's set in a forgotten town in South America (well that's what the internet tells me - whilst reading it, I thought it was somewhere in the USA!) that's filled with what I can only describe as outlaws.

The book is a fast-paced action with a casual approach to death, plenty of violence, buckets of blood, vampires, weird goings on and a cast of what feels like hundreds but is probably only in the tens. It feels a bit like it's paving the way for a TV series and it's peppered with in-jokes that tie into horror/thriller films. At times the style (especially the dialogue) is a bit clunky but the pace of the story allows you to brush over that and I remained interested to the end. Mainly because I was intrigued by the mass-murdering Bourbon Kid who has a very hard to pin down motive. I'd say that this is a fun read as long as you are willing to suspend belief and value plot over style.

I noticed that there is a recently published sequel although as there were not many characters from this book left alive to star in it though...
Posted by Peta at 18:07

Labels: rip III, The Book With No Name