I think I might have been a little carried away with the R.I.P. reading challenge as this is the seventh book I have read for it and I have a couple more still on my bookshelf. Whoops. 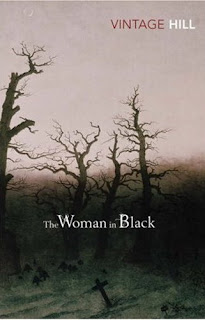 The Woman in Black

is one of those books that has lurked at the back of my conciousness as a modern classic that I should read at some stage. I knew that it had been adapted into a play that's been running for 20 years (which oxfordreader recently found chilling and I'm very tempted to go now!) and that there was a TV adaptation years ago but I had no idea what it was actually about other than it was "a ghost story". Never one to investigate too thoroughly I ordered it anyway as it sounded like it would fit into the R.I.P. theme nicely.

"Proud and solitary, Eel Marsh House surveys the windswept reaches of the salt marshes beyond Nine Lives Causeway. Arthur Kipps, a junior solicitor, is summoned to attend the funeral Mrs Alice Drablow, the house's sole inhabitant, unaware of the tragic secrets which lie hidden behind the shuttered windows. It is not until he glimpses a wasted young woman, dressed all in black, at the funeral, that a creeping sense of unease begins to take hold, a feeling deepened by the reluctance of the locals to talk of the woman in black - and her terrible purpose."

Susan Hill says on her website that when she was thinking about writing this book, she pulled together a list of ingredients which included:

1. A ghost… not a monster or a thing from outer space but the ghost of a human who was once alive and is known to have died but whose recognisable form re-appears – or occasionally is not seen but heard, or possibly even smelled.

4. A sceptic. A narrator or central character who begins as a sceptic or plain disbeliever and scoffer but who is gradually converted by what he or she sees and experiences of ghostly presences.

Susan Hill absolutely hits the nail on the head with the application of these ingredients and in The Woman in Black she has written a true "classic" ghost story that really felt as if it was written decades ago rather than in the 1980s. The language she uses feels so authentic and the style is so very convincing. She also really knows how to build tension! Using the device of the narrator looking back on events that occurred when he was a young man, she is able to drop tantalising hints throughout the book that mean that this is a real page turner. Although short, this is a very satisfying book and one that's absolutely perfect for the week before Halloween!
Posted by Peta at 08:08

Hi, I found your blog looking through the reviews on Carl's site. What a coincidence, yesterday I *finally* watched the TV film of The Woman in Black. It was not as scary as I had hoped/feared, but very atmospheric and nicely done.

Who is the narrator in the book?

Thanks for dropping by.

The book is narrated by Arthur Kipps (the young solicitor) who tells the story years later. I shall have to dig out the film as I'm not too fond of scary films but I do like atmospheric ones!

Hiya thanks for signing up to The Year of Readers. I've sent you an e-mail inviting you to write in the blog when the challenge starts next year. Blogger's playing up a bit so I'll put up a link to your blog later and I'll e-mail you your sponsorship form later today. Do you know which charity you'll be supporting?

Interesting about the narrator, there isn't one in the film. The story is happening in the "present" (the present being the '30s or thereabouts).

Good luck tracking the film down, it's very hard to get because it never appeared on DVD. I've had to resort to d/l'ing it eventually.

I've never read this... in fact, I've only read one, a review copy of The Battle for Gullywith which was ok, but nothing very special, really. This has much more acclaim - but I'm bad with scary! Is it Shirley-Jackson-gothicky or Stephen-King-terrifying?
Simon

Hi Simon - definitely gothicky over terrifying. I don't "do" horror or terrifying in books, TV or films. Far too much of a wuss!