is Terry Pratchett's latest book and, not to leave you in any suspense, it's an absolute corker. It is a book written for children but I am sure that most adults will also enjoy this one and the themes that it tackles are by no means childish. 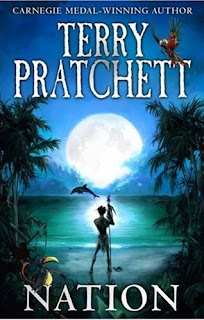 "Finding himself alone on a desert island when everything and everyone he knows and loved has been washed away in a huge storm, Mau is the last surviving member of his nation. He's also completely alone - or so he thinks until he finds the ghost girl. She has no toes, wears strange lacy trousers like the grandfather bird and gives him a stick which can make fire. Daphne, sole survivor of the wreck of the Sweet Judy, almost immediately regrets trying to shoot the native boy..."

Mau and Daphne don't remain alone on the island for long as soon other survivors soon start to arrive to take refuge on the island. At this point, Mau is struggling with his own reaction to the tidal wave as he is still traumatised after facing the horrific task of clearing away the bodies of every single other person who lives on his island. He is also struggling to understand how the island's Gods could have caused such an event to happen and the concept of "blind belief" is one of the book's central themes. Like Mau, the people who wash up on the island have lost everything and they seem to be unable to take decisions themselves and look to the teenager Mau for leadership. At first suspicious of each other, the two young people grow to become friends as they start to build, and organise, the community that forms as the number of survivors reaching the island increases.

This book is set in a slightly alternate 19th century and this gives plenty of fodder for poking fun at British blinkered expansionism and the traditional view of the "savage" lives led by people on isolated islands. Much of the comic relief comes from the situation that Daphne finds herself in. She is a correctly brought up girl from privileged background who has been indoctrinated with plenty of firm beliefs on what is right and wrong from her Grandmother. Practical and useful things like issuing Mau a written invitation to tea using her own headed notepaper...

In spite of, or perhaps because of, what he's referred to as his 'embuggerance' TP has produced a subtle and extremely well written work. This book does feature his usual gentle humour but it is a large step up from his recent work and could well be the best book he's written.

Other reviews from the Guardian, the Times and the Independent.
Posted by Peta at 07:03