This was one of my charity shop bargains from last week and at 50p it was a snip. I got hold of four of David Lodge's books and am trying to read as many as possible before I see him in action, as it were, at the UEA LitFest next week.* 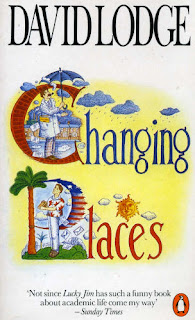 is the first in a trilogy of campus novels (the other two being Small World and Nice Work which were both shortlisted for the Booker Prize) and from the blurb:

"When Phillip Swallow and Professor Morris Zapp participate in their universities' Anglo-American exchange scheme, the Fates play a hand, and each academic finds himself enmeshed in the life of his counterpart on the opposite side of the Atlantic. Nobody is immune to the exchange: students, colleagues, even wives are swapped as events spiral out of control. And soon both sun-drenched Euphoric State University and rain-kissed University of Rummidge are a hotbed of intrigue, lawlessness and broken vows..."

This book is set in 1969 and whilst the political landscape we live in has changed since then, Lodge uses observational comedy to expertly explore more serious subjects, such as feminism and consumerism, and to demonstrate how society at that time was undergoing a change as the students at both Universities become more politically aware.

I really should mention the narrative devices David Lodge used to tell the story - he takes us from traditional novel format to extracts from newspapers to an exchange of letters between several parties then returned us to a novel and finished with a screenplay. All of which were expertly executed. I'm already looking forward to reading the other books in the trilogy!

*By the time I finished this post, it was after he'd participated in the UEA LitFest and I didn't get around to seeing David Lodge speak last week. I blame work and will try harder!
Posted by Peta at 12:53