The Witch of Portobello - Paulo Coelho

"This is the story of Athena, or Sherine, to give her the name she was baptised with. Her life is pieced together through a series of recorded interviews with those people who knew her well or hardly at all - her mother, colleagues, teachers, friends, acquaintances, her ex-husband. The novel unravels Athena's mysterious beginnings, via an orphanage in Romania, to a childhood in Beirut." 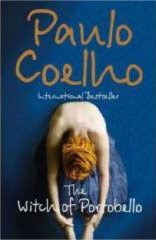 We know from the outset that Athena, who has been dubbed 'The Witch of Portobello

' for her seeming powers of prophecy. has been murdered. Each chapter is a transcript of an interview with someone who came into contact with her and gradually the reader comes to understand how Athena/Sherine has developed her spiritual philosophy and how her influence on those around her may have resulted in her death. The first person narrative allows each character to provide differing views of Athena and project an interpretation of events unfolding that allows the reader to draw their own conclusions about their impartiality.

I've not read any of Coelho's other books, although I am sure I have a copy of The Alchemist lurking somewhere, and I admit that I approached reading this one with some caution. I think I was expected it to be a bit more inaccessible and mystical. There is a lot of exploration of the religion of the Mother and how to attain communion with her and achieve happiness that's not based on dependence on others/materiality however this is mixed in with a decent plot where you care about (most of) the characters and want to know what events happen that lead to her death.

Based on this, I might dig out that copy of The Alchemist if only to find out why it's "a global phenomenon". Or so the blurb says.
Posted by Peta at 09:05