, which I was prompted to dig out and read after it featured over on Neth Space. 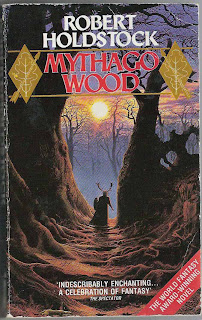 [edit: I might have just finished this book when I wrote this but then forgot to post it for a week - whoops!]

In the aftermath of World War Two, Steve Huxley returns home following the death of his father. He find that his brother, Christian, has become obsessed with their father's investigation notes on the mysterious Ryhope Wood which borders their home. Ryhope Wood is an ancient woodland that has lain undisturbed since the ice age and appears no more than three square miles in area from the outside. However, as Steve and his friend Harry Keeton soon discover, it's significantly bigger, and more dangerous, on the inside.

The Mythagos of the title are myth-creatures who are created from the subconscious minds of the humans who live near them and are generally based on folk tales or racial memories. This means that there are a range of influences at play within the woods with a mixture of mythagos appearing from pre-history, from myths, folk heroes and legends as well as more recent incarnations - the accuracy and strength depending on the imagination of the people who live nearby.

For a book first published in the 1980s, it feels strangely old fashioned. It slightly reminded me of the Cosmic Trilogy

by C.S. Lewis but that could just be because both start out in a countryside that isn't quite what it seems. Mythago Wood won the World Fantasy Award for best novel in 1985 and it is a really original book that is quite different to anything that came before it. Robert Holdstock has written several books in the setting of the Mythago Wood and I might well hunt out the sort-of-sequel, Lavondyss, to delve deeper as I gather that's the best.
Posted by Peta at 11:33