is Danny Scheinmann's debut novel and came to prominance after being selected as one of Richard and Judy's book club reads last year. The title alone was enough to convince me to read this book even though I didn't know anything about it! 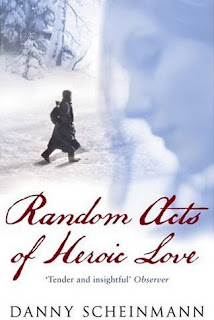 This book follows two intertwining story threads. The first is that of 25 year old Leo Deakinwho has woken up in a South American hospital with no clear recent memories and who learns that Eleni, his girlfriend, has been killed in the same bus crash that put him there. We follow Leo as he returns home to England and struggles to come to terms with the loss of Eleni.

The second story thread starts at the outset of World War One and follows Moritz Daniecki as he is conscripted into the Austro-Hungarian army and sent to fight on the Russian front, leaving behind him his young love Lotte. He experiences horrific, freezing battle conditions on the before being captured and sent to a POW camp in Siberia. His memories of Lotte give him the determination and strength to survive his experience and his journey back to try to find her is remarkable in that it was actually undertaken by Scheinmann's grandfather.

Between them, both stories cover decent ground in terms of dealing with love, loss and hope however for me the Leo storyline fizzled out once he'd returned home and I soon lost patience with his situation wishing that he'd been killed in the crash rather than the more interesting character of Eleni. Luckily, it was interspersed with Moritz's journey home or I might have given up on this one.

Feeling I am being a bit harsh, I'd say it's a good debut novel with the story itself being enough to keep you engaged but don't expect too much from the Leo bits.
Posted by Peta at 10:40

The title & your little sis lending it to you got you to read it! I agree with the Leo comments, became frustrating & a tad repetitive, but really enjoyed the other story.