I've watched the excellent 2005 film adaptation, directed by Fernando Meirelles, of John le Carré's The Constant Gardener and loved it. I've read that le Carré said that the film followed the plot of the book but not the story and having read the book I agree but don't think that the adaption suffered. 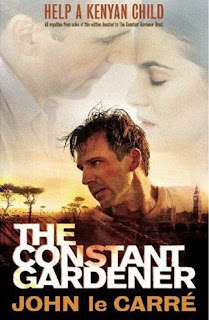 For those who have not watched the film, or read the book, the Constant Gardener tells the story of Justin Quayle, a British diplomat based in Nairobi, and his recently murdered wife, Tessa, who has become a passionate activist championing a number of local issues. Investigating what Tessa was researching at the time of hear death takes Justin around the world and uncovers an uncomfortable dossier of evidence that implicates the dubious business practices of a very influential drugs company.

This is an interesting book that quite probably hits a few nerves. I find it hard to say if I'd have enjoyed it as much if I'd not had the imagery from the film in my head - especially the chapters set in Kenya. I think it's a strong story with an element of suspense throughout as you try to understand what shade of grey each character really is - nothing is ever black and white.

It's one of the few instances where I prefer the film to the book, although that isn't to say that the book's not good in its own right! I plan to re-watch the film in the near future so it'll be interesting to see it again in light of some of the extra knowledge I now have.
Posted by Peta at 09:45

I enjoyed the film, too. I thought about reading the book, but after reading The Spy Who Came in From the Cold I am wary of John Le Carre. I've heard good things about him, but that book was torturously boring for me.