This is both a Once Upon a Time IV & Graphic Novels Challenge 2010 read.

I think it might be time to tell all about a little book buying "accident" that happened earlier this month. I bought (on impulse) volumes one to four of Neil Gaiman's Absolute Sandmans... I've never even read them (which I feel perhaps I should have done to splash out just over £50 per book!) but in my defence I've known that I neeeeeeeeed to own them for at least two years and a couple of weeks ago I had what we shall call a "whoops". 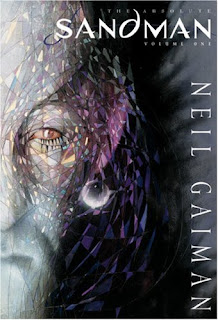 Yes, dear Reader. I bought all four leather bound, hardbacked, slip-cased, digitally re-coloured and generally utterly gorgeous volumes. Whoops indeed! And even had the courage to 'fess up to Mr B before the arrival of the first package. Who kindly didn't point out that we will be moving house in the next few weeks and have to pay for boring things like stamp duty and solicitors fees and removal men and woodworm and damp and render and oh ye Gods what have I done...? Oh well - too late for regrets. :)

Volume One collects the first twenty issues of The Sandman series of comics, written by Neil Gaiman, with the story focusing on the character of Dream – one of the seven Endless - and so covers the trade paperback editions of Preludes & Nocturnes, The Doll’s House, and Dream Country. With guest characters from the DC universe, this books weaves mythology, folk-lore and history together to create something really rather special.
Posted by Peta at 07:26

I think you'll find it was a very, VERY worthwhile "whoops" :D The series gets better and better and MYHEADWILLEXPLODEbetter as it progresses. You'll see :P

If only Forbidden Planet would dispatch Volume 2.... Although they're bound to send me Volume 3 first!

Wow... how fun!
an expensive head explosion.. 50 quid per book .. at four each. Now all you need is four autographs...

I think if I want four autographs I'm going to need helpers. Not sure I could actually carry all four at once! :)

I'm reading (and loving) The Sandman series for the first time too. Kinda wish I had invested the extra money in these editions now though!

I have to say that this book is gorgeous but I would guess that the series is a pretty good reading experience however you arrive at it.

If only volume two would hurry up and arrive though!!