Howard's End is on the Landing - Susan Hill

Credit (or perhaps blame...) for the impulsive purchase of this book has to go to Simon from stuck-in-a-book who thought so highly of it when he blogged about it last year that he even gave it a coveted place in his "50 Books You Must Read But May Not Have Heard About" list! 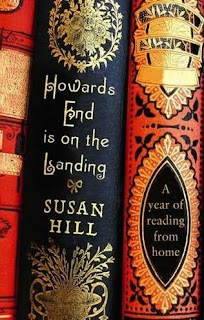 I thought the book sounded very much "up my street" when I read Simon's post but what clinched it for me was that stunning cover by Peter Dyer. Isn't it just to die for? When I saw it I knew that I *had* to buy it at once - and in hardback as I could not bear to risk that it'd be issued in a differently designed cover when released in paperback... I know. It's a condition, OK?

Having bought it on impulse it then sat forgotten and unloved on the downstairs non-fiction shelves until I chanced upon it whilst dusting.

On her inspiration, Susan Hill writes, "Early one autumn afternoon in pursuit of an elusive book on my shelves, I encountered dozens of others that I had never read, or forgotten I owned, or wanted to read for a second time. The discovery inspired me to embark on a year-long voyage through my books, forsaking new purchases in order to get to know my own collection again."

On her meandering journey through her shelves, Hill writes chapters dedicated to genres such as classics, 20th century fiction, travel, diaries/memoirs, children's books and even manages to cover pop-up books too. She also writes (among other things) about whether editions of books matter, the importance of a good title, how books end up huddled together, fonts and the memories a book can evoke.

As you can probably gather, this is quite wide-ranging and personal account of her years spent with books - reading, writing, reviewing, publishing and also reminiscing about some of the authors she's met. As a journey through her home and shelves I could not have asked for anything more from this very personal book which is written in an informal, chatty style by someone who has lived in and around books for most of her life.

Hill does have a manner of asserting her opinion allowing no rational alternative which I found irritating at times - for example I don't agree with her views on book blogging, e-readers or the entire Sci-Fi genre - but largely what she says about the pleasure of owning, and reading, a huge range of books hit so many right notes that I can't quibble about the occasional (for me) wrong one.

I fear Hill would look down on the semblance of order that my books reside in - far too organised for her taste! Upstairs in the "study" is Sci Fi & Fantasy, on the landing is contemporary fiction and children's, in the bedroom is imminent TBR (although honesty forces me to admit that there is a TBR overflow on the landing too...) whilst downstairs in the dining room is classics, plays, poetry, reference, travel, history, science, auto-biography and biography. Only the classics are arranged in alphabetical order by author but I can't promise things will remain this organised once we move house.

The book leads up to a "Final Forty" selection that Hill decides are her essential can-no-do-without books. I won't reveal it here as that would spoil the journey but Ido find it endlessly fascinating how people's reading tastes can differ (Hill hearts Hardy & Dickens, I heart Austen but at we both agree on Trollope) and I can't imagine how long it would take me to whittle down my books to a final selection of ones I love. Just thinking about doing it makes me a bit anxious to be honest and I commend her for putting it out there as well as I gather she's received some criticism for not having a wider choice. I rather liked her list myself, although should say that it would largely differ from my own final selection, and reading her memoir has certainly encouraged me to seek out some of the books she loves. Although I am still not sure about Hardy...
Posted by Peta at 17:58

Labels: Howard's End is on the Landing, Susan Hill

Great review, sorry I found it so late - and now it makes me want to re-read HEiotL immediately!
Simon